A new plan for RBS

A new plan for RBS

When Ross McEwan took up the role of RBS CEO in October last year he began a period of listening and fact finding that would shape the beginnings of a new plan for RBS. Five months later, this video follows some of the key events of that period as Ross prepares to reveal a new direction for RBS. 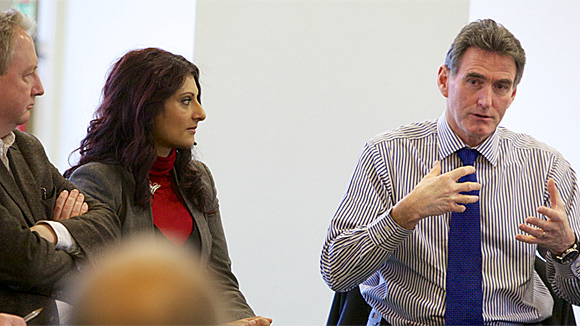 Ross McEwan on a listening and fact-finding mission

This includes being the first to launch new products under the Help to Buy: mortgage guarantee scheme. This was followed with further improvements for personal customers with the ability to managing savings on mobile apps and an extension of banking services for customers at the Post Office.

Lending to SMEs has remained in sharp focus through a period that included Sir Andrew Large’s report on his findings from the RBS commissioned independent lending review. To date, RBS and NatWest have offered 23,000 customers around £6.6billion as the banks proactively write to customers in a bid to increase lending following commitments made after the review. Meanwhile, Ross McEwan sought the views of a variety of business customers across the country including a visit to Swift Cycles with Chancellor, George Osborne in November.

Reminders of the challenges facing RBS came either side of the New Year through a three hour technology outage affecting customers in December and a trading update at the end of January. Investment in I.T. will be crucial to the future success of RBS and, during a live Q&A with Guardian readers Ross explained: “I will spend as much as I need to to keep systems up for our customers.”

Further events were held throughout February as Ross met with customers and staff including a trip to Ulster Bank in Ireland. Ross presented his thoughts on the future of RBS writing in The Guardian about putting customers at the heart and soul of the bank and, at a customer event in London, further explaining his aspiration for RBS is: “not to be the biggest bank in the world but the best bank in the UK.”

On the day RBS revealed its 2013 results, after five months of listening to customers and staff, Ross McEwan revealed a new plan for the bank at The Trampery, London Fields in Hackney. Ross spoke to customers and staff as he set out his aspiration to be the best bank in the UK and how RBS will earn customers' trust. Watch a video of the event below, or watch or read the speech in full.