Zombies are known for looking glassy eyed, having poor dress sense and eating people, but raising money for charity is not usually one of their attributes. But a shamble of zombies and their potential victims have raised £500 for charity by taking part in a cross-campus chase at Hertfordshire University. The chase has earned the RAG society at Hertfordshire University one of the first Raising and Giving Awards, sponsored by the RBS ESSA and Find Invest Grow. 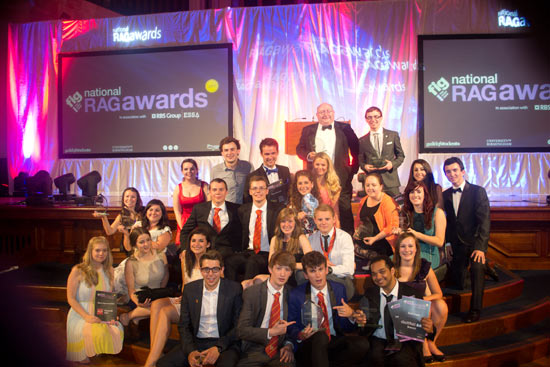 University of Hertfordshire RAG Society at the Raising and Giving Awards

The Awards are designed to give official recognition to the dedication of students in raising millions of pounds for charity.

The Hertfordshire RAG Society won the award for the most innovative event: arts students were involved with costume design and make-up, drama students played the zombies and their victims, the student TV channel documented the terror and 250 students showed up to run the route and dodge the living dead.

Other universities’ RAG societies who earned special praise included Nottingham Karnival, which raised £50,000 with a seven-legged bar crawl, and Sheffield RAG, which is credited for helping a homeless shelter stay open for the second year by raising thousands of pounds to fund meals and accommodation.

The Awards formed part of the annual conference for RAG Societies, organised and hosted in 2013 by the University of Birmingham Guild of Students’ Carnival RAG.

Tim Lucas of the RAG Conference committee said: "We're extremely proud to have launched the first ever formal National RAG Award scheme in Birmingham this year. It was fantastic to recognise the achievements of RAGs over the past twelve months; all of the nominations were incredibly strong and competition for the top spots was fierce.”

The full list of winners, who were judged by Hugh Biddell, Head of Public Sector and Charities at RBS, James King, Chairman of FIG, David Brindle, Public Services Editor for the Guardian, and Sukhvinder Kaur-Stubbs, Chair of Volunteering England, included:

RBS ESSA stands for RBS Enterprising Student Society Accreditation (ESSA), a national scheme sponsored by the RBS Group which pro-actively rewards and recognises your societies and the teams behind them. The RBS ESSA certification is the official stamp of achievement and recognised by potential employers.

To find out more about the scheme, visit Enterprising Student Society Accreditation (ESSA).