What does it mean to ‘think sustainably’? According to Andrew Cave, Head of Group Sustainability at RBS, it’s about much more than being eco-friendly. 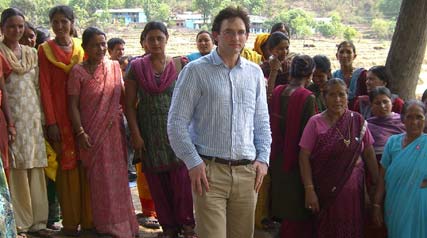 “Sustainability is also about people and livelihoods” he explains. “It’s more than just an environmental consideration.” What’s more, he believes the concept should influence the work that Group staff carry out every day.

“For RBS staff, the way I often describe it is that sustainability should be an approach to business which generates profits today in a way that doesn’t compromise our ability to generate profits in the future,” he says, echoing the famous Brundtland Report’s definition of sustainable development.

Andrew recently returned from India, where RBS’ involvement with communities across the nation is helping to transform the lives of rural women. As Head of Group Sustainability, he wanted to see firsthand the positive impact of RBS-funded projects.

The first step on Andrew’s journey took him to a valley in Uttarakhand in the Himalayan foothills, two hundred kilometres north-east of New Delhi. Here, RBS Foundation India works with a local charity partner to support 60 villages on the outskirts of the Corbett Tiger Reserve.

This region has recently suffered unprecedented damage from flash floods caused by excessive rainfall, although the villages that RBS Foundation India is supporting have not been as badly affected as those in other areas. Despite this, local infrastructure and tourism visits to the villages have been affected.

“It’s a pretty remote area,” Andrew reveals. “Subsistence agriculture is still common, with little by way of salaried incomes. A lot of men from the area leave to join the Indian army and are away for years, so it can be a tough existence for the women who live there.”

Given these circumstances, the Group is helping local people to maximise their resources in the best way possible.

“The programme has been helping the villagers to invest in alternative livelihoods through beekeeping, silk and organic spices cultivation and a range of other micro-enterprises,” says RBS India Foundation Director N.Sunil Kumar.

The drive to encourage alternative enterprise has a direct link to preserving the environment itself, reducing the strain from animal grazing and fuel collection on the local forest.

With the help of Non Governmental Organisations working in the local area, the RBS project educates people about different approaches to these traditional practices that can benefit both local people and the environment they live in. For example, by stall feeding cows with sustainable crops from the local area, not only is the natural habitat protected, but milk productivity is also boosted significantly.

“There are a whole series of interventions like that, all of which help to boost incomes and reduce the impact on the forest,” Sunil explains.

The next stop on Andrew’s travels was the semi-arid state of Gujarat in the west of India. As water is scarce in the region, RBS is funding projects that improve the productivity of irrigation farming, as well as introducing some innovative new methods along the way.

One strand of this that Andrew finds particularly fascinating is the use of earth worms to produce high-grade organic vermicompost, which is then sold commercially by the female entrepreneurs running the business.

“Local women’s groups take waste household and agricultural products, place it in purpose-made trenches and then put in buckets of special Vermi worms, which originate from Africa,” Andrew says. “After about two months the whole thing has been turned into really high-quality organic compost, which they bag up and sell.

“It couldn’t be more sustainable. Turning waste products into something really useable is about as good as it gets in terms of creating a closed loop sustainability product. The process actually becomes  a viable business within a year.”

“One of the most interesting things I saw was the work with co-operative formation,” Andrew continues.

These projects help women producing a variety of crops in Gujarat, such as peanuts, to reduce the number of steps between themselves and their customers.

Previously, the business chain had seen farmers selling their produce to a middle man for processing, after which it was sold onto a company that packaged

and branded the goods before they were finally sold onto consumers via retailers. With four distinct stages in the value chain, the producers were making a modest profit.

However, a simpler, more integrated process resulted in a better outcome for the local producers.

“Through the formation of the co-operatives they are able to retail their own produce in shops and at markets in the nearest big city,” Andrew explains. “They are then able to get a lot more of the economic benefit of what they’re producing.”

Such a progressive approach makes a real difference for the producers who are the cornerstones of these enterprises.

At Uttarkhand, the community has successfully developed a brand - ‘Devbhoomi’ - for its organic honey and spices, and skilfully blended Oak Tussar silk with traditional Mulberry silk using vegetable dyes. Incomes have gone up across households by up to 100%, and unsustainable extraction from the fragile Himalayan ecosystem by these villages has come down.

In Gujarat, the budgeting of water and knowledge-based crop practices have brought down costs by 25%, and together with micro-enterprises have raised household incomes by up to 100%.

Drawing on his interest and background in international development, Andrew sees opportunities to bring the work of the RBS Foundation India closer together with the Group’s Inspiring Enterprise and Women of Tomorrow programmes, recognising the strong crossovers between these projects.

More broadly, Andrew is working with the RBS Group Sustainability Committee to change the perceptions of sustainability within the Group, emphasising the importance of the issue to the company and our corporate values, and aligning it more closely with social and economic development and community aspiration.

According to Andrew, the values at the heart of RBS’ work in India resonate right across our international footprint, from the Himalayan foothills and irrigated plains of Gujurat to our bank branches and offices worldwide.

“In keeping with the Group’s ‘Thinking Long term’ value, we want our people to think about what the impact of our actions will be over the next ten years, rather than just the next year,” he concludes.

Women of Tomorrow is a global, internal campaign aimed at helping girls out of poverty. While in India, Andrew visited two of our five Charity Partners: Room to Read and the Oxfam project.