Thousands of volunteers – including our employees - will be donning overalls to help spruce up their local cricket club as part of the NatWest CricketForce weekend. 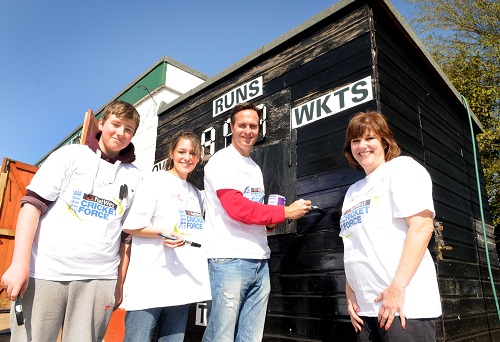 The volunteers will spend 5-7 April doing a wide variety of do-it-yourself activities,from sprucing up the grounds to painting clubhouses, score boards, sightscreens and fences or building new facilities. Others will be involved in fund raising, increasing the number of volunteers, conducting team building exercises, raising the profile of the club or increasing bar takings.

The combined efforts of volunteers can make a huge difference to the fortunes of a local cricket club. In just one year, Tamworth Cricket Club in Staffordshire achieved improvements to club facilities worth £45,000, benefitted from more than 200 hours of skilled labour donated by new volunteers, attracted four new coaches to provide support to the club’s Chance to Shine programme, and seven new committed volunteers playing an active role in the everyday life of the club.

NatWest has supported cricket for more than 30 years, and CricketForce is now in its second decade with around 2,000 clubs across England and Wales taking part.

Last year 85,000 volunteers helped renovate their local clubs – even more than those who became Games Makers, the volunteers who helped to make the London 2012 Olympics such a success.

To find out more about CricketForce, vist the England and Wales Cricket Board website, where you will also find a full list of the cricket clubs participating in the CricketForce weekend (PDF 389KB).