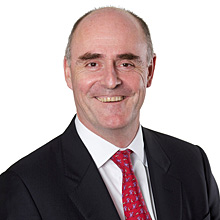 Experience:
Simon McNamara was appointed Group Chief Administrative Officer, RBS Group in September 2013.  Prior to joining RBS Simon was Chief Information Officer (CIO) of Standard Chartered Bank Consumer Bank in August 2008 based in Singapore. Simon was responsible for developing and implementing the Group Technology and Operations strategy which supports the Consumer Bank’s strategy.

Simon holds a Bachelor of Science (Hons) in Economics and Statistics from University College Swansea and a Post Graduate Diploma in Computer Science from the University of Hertfordshire. He has also completed the Executive Programme at Stanford University.

Simon is married with two daughters and one son. His interests include football, skiing and mountain biking.