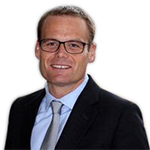 Mark returned to the RBS Group in 2010 where he spent 6 years running Solutions for the Non-Core Division. Mark was then appointed Co-CEO of RBS Capital Resolution (RCR) and subsequently CEO of Capital Resolution, taking on the leadership for the sale and run down portions of Corporate & Institutional Banking. Mark joined the Executive Committee in April 2015.

Prior to this, Mark was Head of Barclays Capital's Principal Investments unit leading transactions in the UK, US and South Africa. Mark joined BarCap from RBS Equity Finance where he led investments such as Canary Wharf and Towergate. Mark is a qualified chartered accountant and trained with PwC Corporate Finance and Cooper & Lybrand audit.