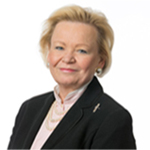 A qualified chartered accountant, she previously headed KPMG’s European and International Government practices and has been President of the Institute of Chartered Accountants in England and Wales. She was appointed to the House of Lords in 2000 and has served on the Conservative front bench in various roles including as shadow treasury minister between 2003 and May 2010. Previously held non-executive roles on the Court of the Bank of England, Hanson, ICI, Severn Trent, Carpetright, John Laing and SThree.