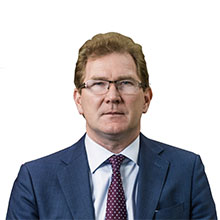 Dr Andrew McLaughlin was appointed as the CEO of RBS International in July 2015 and joined the Executive management team on 1 October 2018.

He was formerly Director, Communications and Chief Economist for RBS. Before joining the bank, he spent three years in corporate finance advisory working with Ernst and Young.

Andrew holds a first class honours degree in Economics and Politics. His 1993 doctoral thesis won the prestigious Walter Bagehot prize for best UK dissertation. Andrew spent several years working in academia before beginning his commercial career. He published a book on the automobile industry in 1998.

Andrew has held a number of advisory and non executive positions during his career including with the Prince’s Trust, CBI, Universities of Oxford and Nottingham and the States of Guernsey. Andrew was previously a regular commentator in UK print and broadcast media and also a columnist in China Daily.