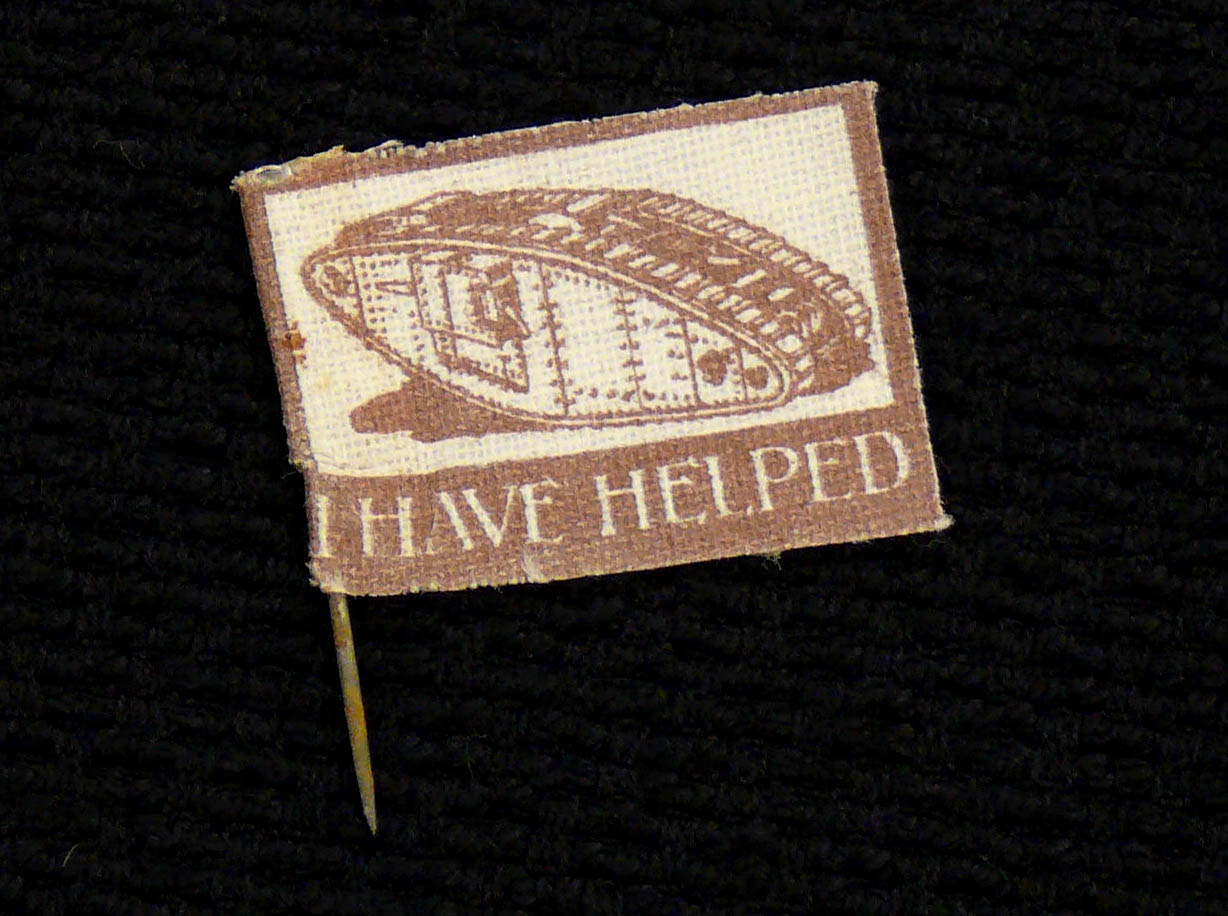 'I have helped'. What more could anyone hope to say at a time of widespread fear, hardship and loss? 1917 was just such a time. Three long years into the First World War, few people were untouched by its devastation. The fighting had gone on longer than anyone thought possible, and showed no sign of ending. It would have been easy to feel a sense of helplessness. This flag is a memento of one of the ways that ordinary people refused to be helpless.

Fighting a war was an unimaginably expensive business - not only in lives, but in cash too. The government constantly needed more money, and introduced a whole range of enterprises to raise it, from war loans aimed at larger investors to war bonds and savings certificates for those on smaller incomes. Promotional events ranged in scale from the famous nationwide Tank Bank tour to one-off fundraising weeks and flag days. This flag was given out at one such event, possibly - in view of its tank motif - at a Tank Bank.

Tanks had first been used at the Somme in 1916, but it was their role at the Battle of Cambrai in 1917 that fired the public's optimism. Here, at last, was something that looked like it could break the war's terrible stalemate.

The Tank Banks aimed to harness that optimism by encouraging people to buy war bonds and savings certificates. Battle-scarred tanks toured towns and cities all over Britain, often amid great fanfare. The first one, named Nelson, made its debut in London's Trafalgar Square in November 1917, accompanied by public speeches and a variety programme featuring 80 theatre chorus girls. Crowds queued for hours to make their investments, and Nelson raised nearly £3.5 million in just two weeks.

Just around the corner from Trafalgar Square were the offices of RBS constituent Holt & Co. Its staff knew as much as any civilian about the high price of war. They specialised in serving military officers, and the war had increased their workload massively. Like all banks, they sold war savings products like those marketed by the Tank Banks, but they also handled the pay of over 65,000 serving officers. As the months went by, they saw name after name being added to the bank's lists of clients on active service. They also saw countless names removed to separate lists; lists of men who would not be coming home.

It was among these books that the lapel flag was found. We don't know who originally owned it. Perhaps a clerk ventured out one day to see Nelson; perhaps he joined the long queue to buy savings certificates. Back at the office, he may have dropped his lapel pin into a drawer, or tucked it between the pages of a volume, before resuming work. Somehow it survived until the war was long over, and the records themselves had become historic documents. Today, it reminds us of the human need in terrible times to say 'I have helped.'