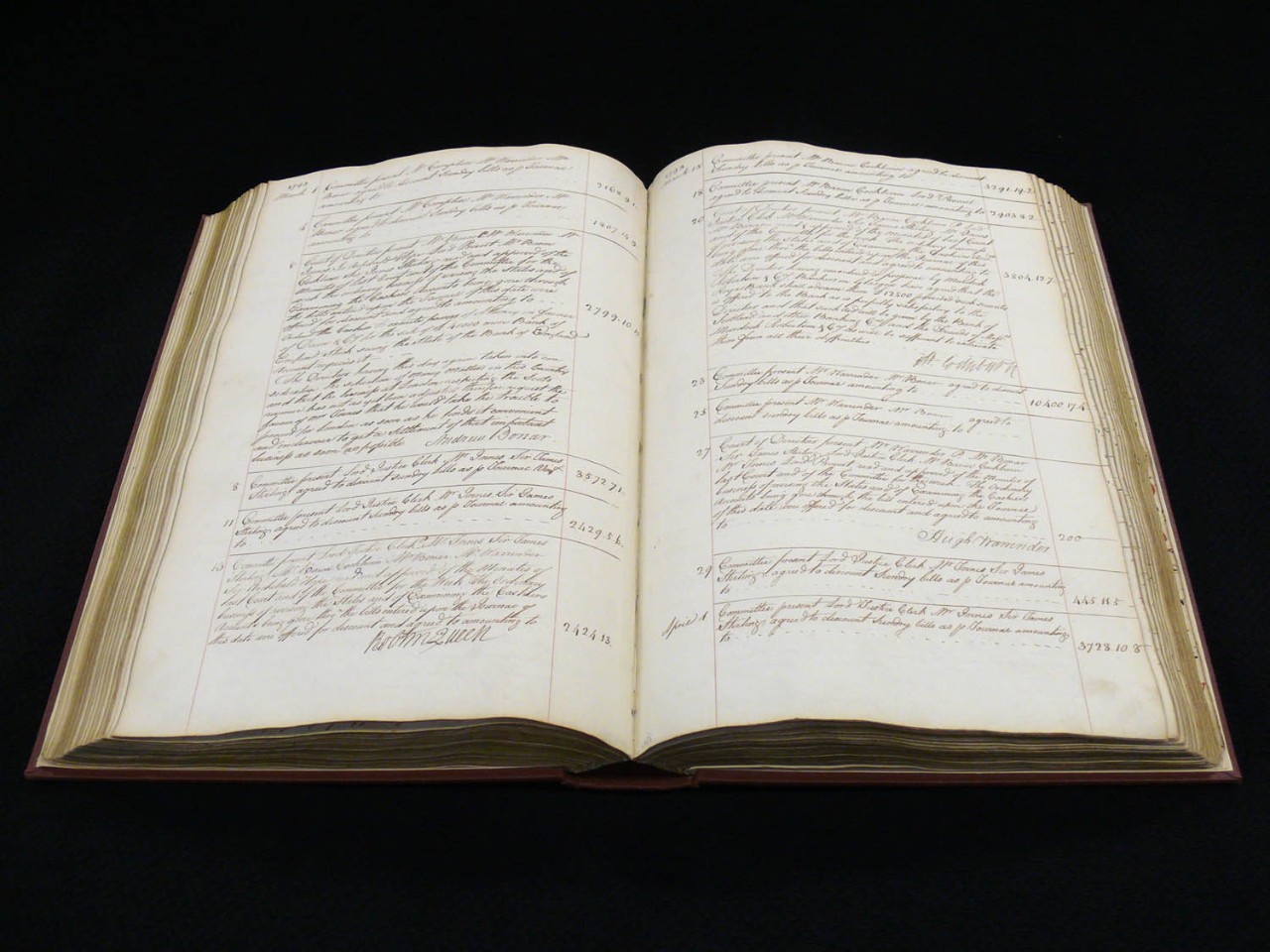 Minutes of crisis meetings of the directors of The Royal Bank of Scotland, 1793. © RBS

In the spring of 1793 The Royal Bank of Scotland stood on the brink of collapse. It had overreached itself in a difficult market and was caught out with far too much debt on its books as a wider commercial crisis unfolded. This volume, containing the directors' meeting minutes, explains what happened.

Everything had seemed to be going so well. The bank had opened its first branch in Glasgow ten years earlier, and business there had boomed beyond all expectation. Glasgow was growing rapidly, developing into one of Britain's economic hotspots. New businesses, factories and mills were opening all the time, and the Royal Bank had a hand in financing many of them. Demand for capital was near-insatiable, and the Glasgow branch stretched itself further and further. It seemed that its loans would go on fuelling development and generating healthy profits forever.

In February 1793, however, Revolutionary France declared war on Britain, and everything changed in the blink of an eye.

| General commercial collapse was a very real and terrifying possibility

News of the war immediately sent jitters through the economy, creating huge demand for money. Bills were returned unpaid, the Bank of England curtailed credit and almost all areas of trade slowed down. The government promised that, if times got hard, it would underpin credit, but it was not obvious exactly what it would do, or what the repercussions might be.

In April 1793 the worsening economic situation forced one of the Royal Bank's biggest Glasgow customers to take a large loan from the bank to see it through the downturn. This came on top of the many loans the bank had already made to Glasgow manufacturers, leaving it hopelessly overstretched and exceptionally vulnerable to worsening conditions.

The situation was bad across Britain; worse in Scotland; and terrible in Glasgow. General commercial collapse was a very real and terrifying possibility, and the Royal Bank stood right at the sharp end. It became clear that the crisis could now only be resolved by wise intervention from Westminster. Government advisers devised a plan to issue Exchequer bills that would allow trade to start moving again and banks to extend new credit. A senior director from the Royal Bank went to London to appear before the convened Select Committee and explain the bank's situation.

The proposal to issue Exchequer bills was passed on 29 April and given royal assent on 9 May 1793. These minutes record that on 15 May the Royal Bank resolved to apply for £200,000 of Exchequer bills. In all, over £2.2m of bills had to be called before the danger had passed. Of these, 20% went to Scotland, mostly to Glasgow. The British economy in general, and The Royal Bank of Scotland in particular, had been saved by government intervention.