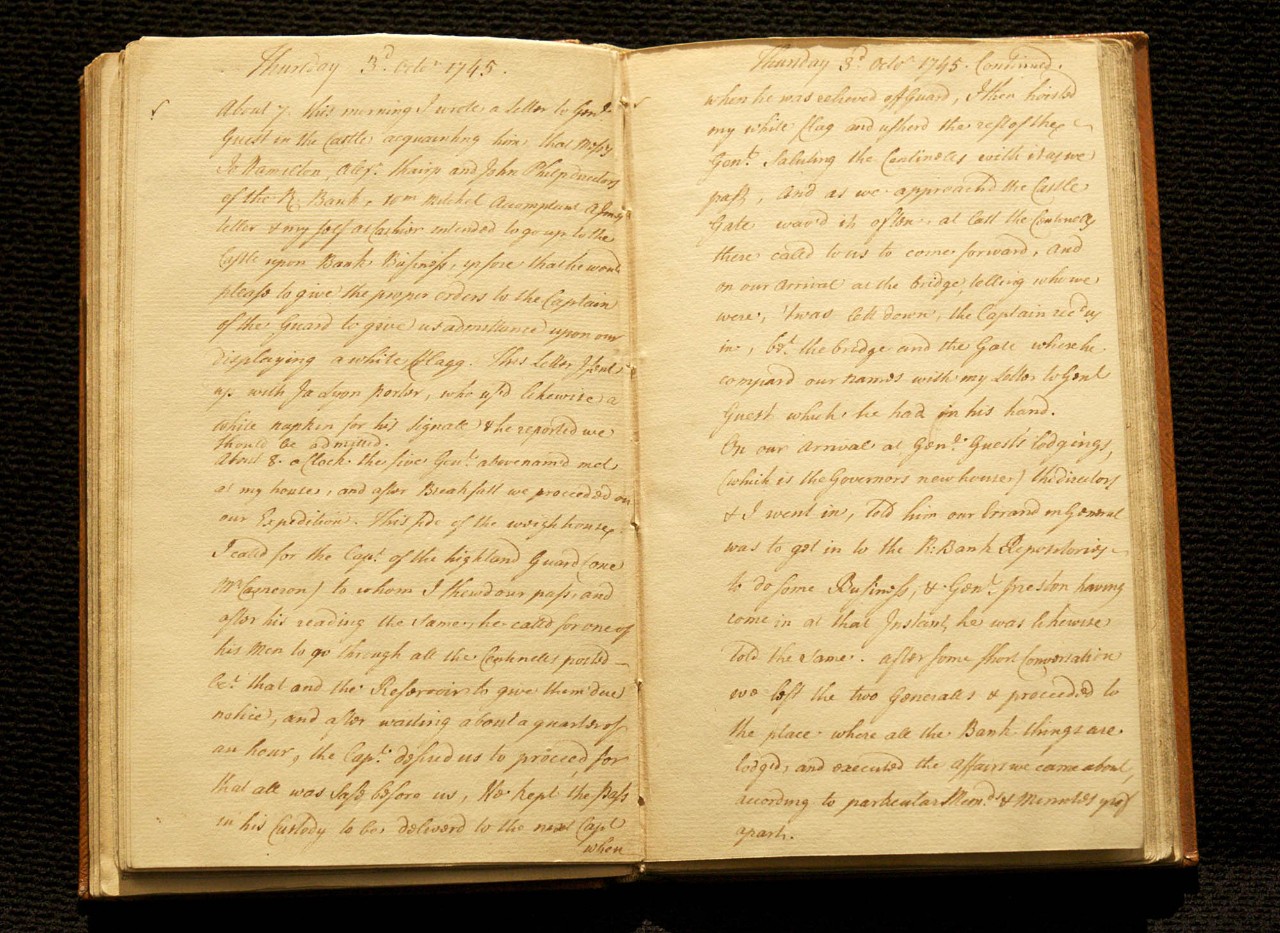 John Campbell joined The Royal Bank of Scotland at its foundation in 1727. In 1745 he became cashier (equivalent to today's CEO). It was quite a moment to take on the top job. This was the year of the famous Jacobite Rising, and his first few months as cashier saw him juggling political factions, liaising with soldiers and politicians and protecting his bank under siege conditions. Normal public order was in turmoil and property at risk. Rebels and authorities alike threatened extreme action, and it was hard to know which of many perils to take most seriously.

For Campbell, the events of the '45 culminated in a long walk up Edinburgh's Royal Mile, waving a white flag to avoid being shot, to retrieve bank gold from the Castle vaults. He risked life and limb for The Royal Bank of Scotland, and this diary tells his story.

| Failure to comply would mean ruin for the bank

The Jacobite army took control of Edinburgh on 17 September 1745. On 1 October, Bonnie Prince Charlie informed John Campbell that he had £857 of Royal Bank banknotes and wanted payment for them in gold. Failure to comply would - one way or another - mean ruin for the bank.

This put Campbell in a tricky situation, because he had moved all the bank's valuables up to Edinburgh Castle for safekeeping before the Jacobite army arrived. It was the sensible thing to do in the circumstances, not knowing what unrest or violence might ensue. At first, it had been easy enough to get access when necessary, but now the Castle - still in government hands - was locked down, and the rest of the city was under Jacobite military control.

Campbell obtained a special pass authorising him to be out in the streets, but even so, his walk up Edinburgh's Royal Mile to the Castle was a risky business. One mistake by an over-eager sentry could have made this a one-way trip.

After some tense moments at the Castle gate he was allowed in. Once inside, he counted out enough gold to cover the Prince's demand, plus more to cover any likely further demands. He also burnt as many unissued banknotes as possible, so that they could not get into circulation and worsen the situation. While he worked, he could hear continuous shooting between government forces in the Castle and Jacobites outside.

Job done, he walked back down the Royal Mile to his office. He sent a message to the Prince to say the money was ready for collection. The Royal Bank had been saved and Campbell rounded off one of the toughest days of his career with - as his diary tells us - a visit to Mrs Clark's Vintner, a local pub. He'd earned it.