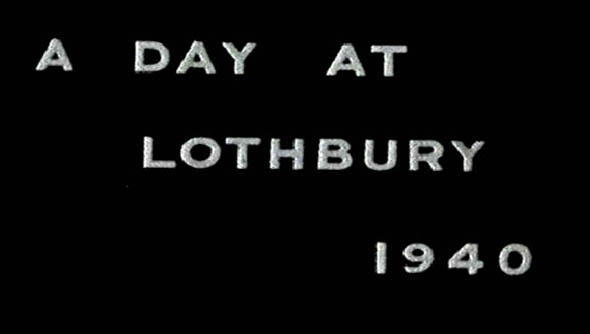 Title card from the Westminster Bank film 'A Day at Lothbury', depicting air raid precautions at the bank's head office, 1940

Today, it's hard to imagine how people managed to carry on with normal working life amid the extraordinary conditions of the Second World War. This film was made in 1940 to demonstrate how successfully one group of people - the head office staff of Westminster Bank - did just that. It was made during the Blitz, a sustained period of bombing in 1940 and 1941 that in London alone demolished a million houses and cost 20,000 lives. Although the film is silent, its opening captions speak volumes: Peace. War. Business As Usual.

The film was intended to boost morale with the message that a familiar, high street institution like Westminster Bank was taking the war in its stride, ready to cope with danger but maintaining normality in the meantime. It shows telephonists, managers, clerks and messengers going about their everyday jobs. It also shows staff folding bandages and practising first aid; donning protective clothing for gas attacks; firewatching on the roof; and reacting coolly and calmly to an air raid alert. Perhaps just as importantly, it also depicts relaxation and leisure. On the night shift, men puff away on pipes as they pore over adding machines and ledgers. Others play cards, chess, or even bowls; women chat among themselves as they knit. Everyone is calm, cheerful, confident and organised.

Westminster Bank's head office was fortunate; it emerged from the Blitz relatively unscathed. Many of the people who worked there - including, no doubt, some who appear in this film - were not so lucky. 35 men from head office lost their lives while serving in the forces during the Second World War. Others who remained at home lost loved ones, or had their lives turned upside down by the bombing of homes and communities. 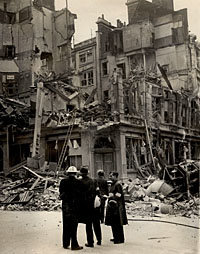 Over 30 of Westminster Bank's branches around London and elsewhere sustained serious bomb damage during the Second World War. Many more suffered minor damage. Local staff went to great lengths to reopen their branches, either in patched-up buildings or in temporary premises, as soon as possible. Britain emerged from the war to meet a changed world. For the banks, the 1950s and 1960s were to see the birth of new markets and new ways of doing business. The world portrayed in this film vanished forever, replaced by computerised accounting, increasing gender equality and diversified banking activities. Business as usual would never be quite the same again.