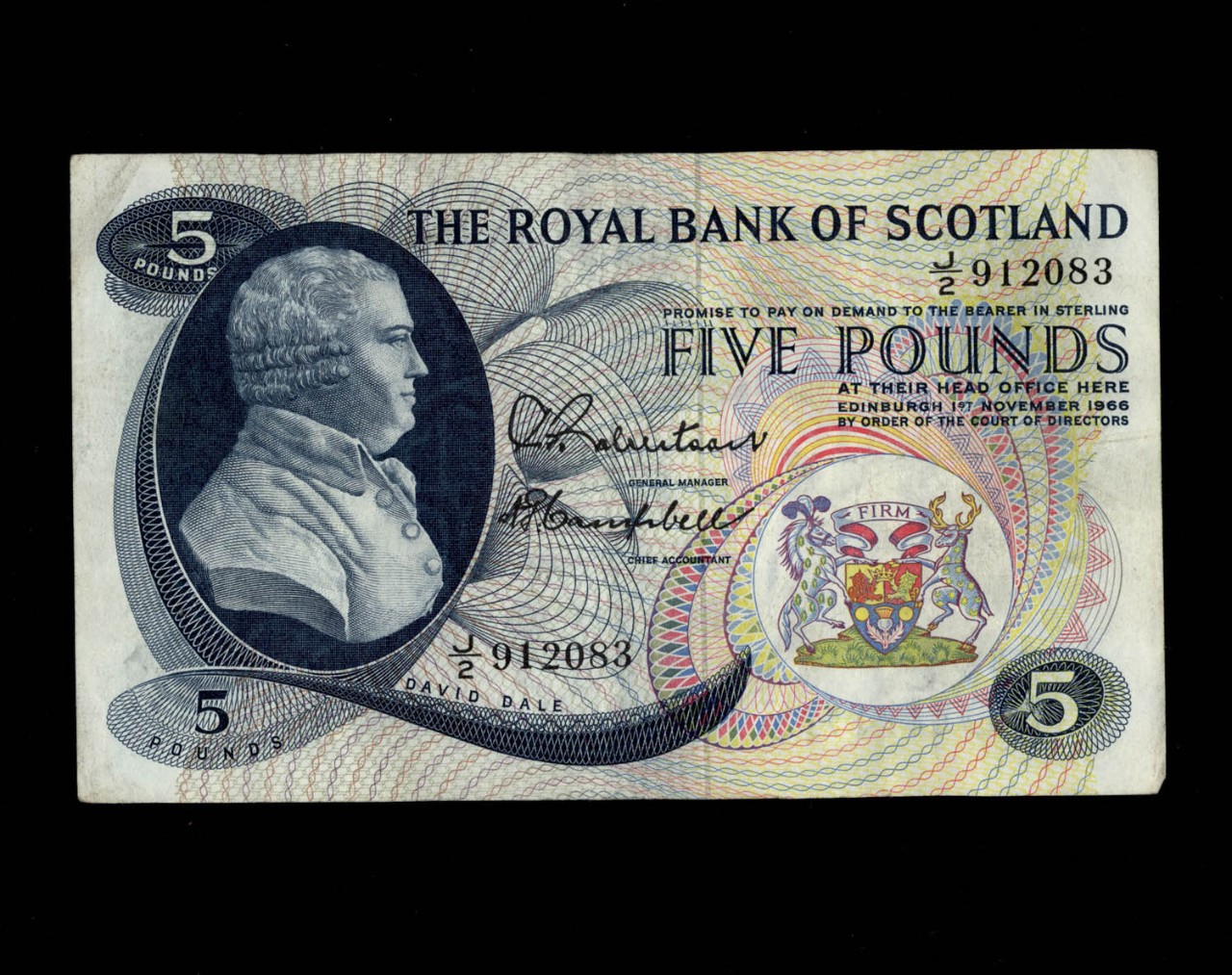 This was The Royal Bank of Scotland's first really modern banknote design. It was its first to be printed in five colours, and its first to feature a metal strip embedded in the paper. Today, it's recognised as one of the most beautiful, artistically accomplished banknote designs of recent decades. There's even a hint of the era's taste for psychedelia in the swirling colourful background patterns.

It's 1966. There's a crisp new Royal Bank of Scotland £5 note in your pocket. But what to spend it on? You could buy a round for everyone in the pub - your £5 should stretch to 50 pints of beer - or if you want to be a bit healthier, maybe 130 pints of milk. You could fill the petrol tank in your new Ford Anglia twice over, and still have almost enough change left to buy the Beatles' latest LP, Revolver.

Before you hand over the cash, though, you might pause to look at the note itself. It probably would catch your eye, because it's quite unlike older banknotes you might have seen.

The Royal Bank of Scotland had been issuing banknotes for well over two centuries. Designs had changed over the years, but the driving considerations had not. As ever, notes needed to be robust, distinctive and hard to copy. For a commercial bank, they also remained a powerful marketing tool - an advert for the bank in every pocket and purse in the country.

The portrait on this note is of David Dale (1739-1806), the important Scottish industrialist and philanthropist. Among numerous other business interests, Dale worked for The Royal Bank of Scotland, serving as its joint agent in Glasgow for more than 20 years. He is best remembered today for founding the cotton mills at New Lanark, which became world famous for their progressive employment practices. Several of his other ventures were also characterised by this combination of commercial interests and concern for humanity.

The other main illustration is of the bank's coat of arms. Although traditional in style, this was a newcomer to the bank's corporate identity. Unlike some other banks, The Royal Bank of Scotland did not traditionally have a coat of arms, and had only been granted this one six years earlier, in 1960. It was only destined to have a very short life as its leading element of visual identity, because in 1969 it was supplanted by another newcomer - the daisy wheel brand symbol which is still used today.