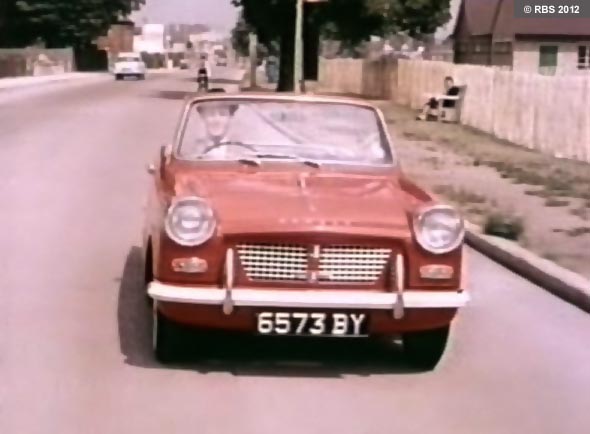 A young man drives his shiny red open-topped Triumph Herald along a busy high street; a woman wears her beautiful new dress to a dance; a little blonde child plays happily on a swing bought by her proud parents. Welcome to Westminster Bank's first foray into film advertising.

Before 1961, Westminster Bank had stuck to advertising in newspapers and magazines. The style of those adverts had advanced over the decades - Westminster proudly claimed to be the first bank to have rejected 'dullness of content and ugliness of presentation' - but by 1961, it was obvious that they were not appealing to young people. An internal memorandum reflected that these printed advertisements gave the bank a 'stern and righteous image...not particularly attractive to that section of the community which does not already use the banks.' New, young customers expected different messages, and the Westminster decided to give cinema advertising a try.

Advertising had traditionally been handled by the bank's Secretary's office. Key messages were defined by whatever the advertising manager at the time thought best. There was no strategy, no system for different parts of the bank to share key messages and no effective way of measuring the impact of advertising. Despite the informality of the arrangement, expenditure was increasing very rapidly. In 1939, Westminster had spent under £18,000 on advertising, but in 1961 it spent over £200,000, and was by no means the biggest spender in the banking sector.

The bank recognised that it needed a more measured approach, and in 1961 it formed a specialist Public Relations department. One of its first projects was the production of this film, You and the Westminster. It was made as an experiment, at a cost of £2,075 plus £330 for advertising slots in 100 cinemas. It showed happy young people enjoying the benefits of a modern, affluent lifestyle, all supported by the ever-present Westminster Bank. It was a testament to the mood of the era. Post-war austerity was finally giving way to prosperity. The first of the baby boomer generation were approaching adulthood, looking towards a future full of independence, romance, glamour and - eventually - beautiful homes and happy, healthy families. All these aspirations and more were embodied in the advertisement, and its finishing slogan: 'Be Modern. Bank with the Westminster.'