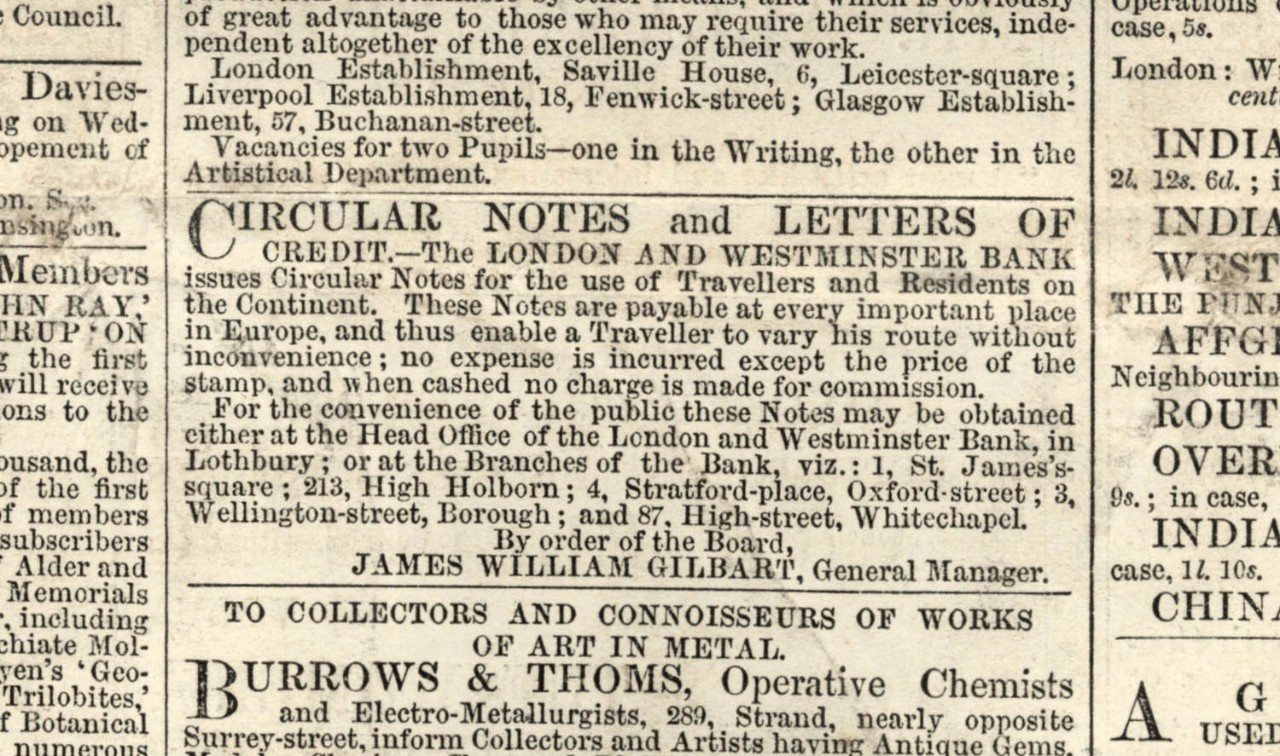 This small notice, nestled amongst many others on the front page of a London literary journal, is a far cry from today's advertising.

These days, we expect to be bombarded by seductive and clever advertisements in newspapers, glossy magazines and cinemas, on street hoardings, television, radio and the web. In the 1840s things were very different. The art of advertising was only just beginning to take shape. Commercial expenditure on advertisements was increasing, particularly in the press, but national campaigns were rare and run largely by purveyors of food and drink, like Schweppes, Lea & Perrins and Crosse & Blackwell, or by insurance companies and patent medicine suppliers. Most advertising was intended for a relatively local market. Few advertisements were illustrated.

In the 1840s Britain's banks advertised very sparingly, generally to announce dividends, annual results or the opening of new branches. This advertisement for services to travellers, placed by London & Westminster Bank, is thus relatively unusual. Although neither eye-catching nor compelling, in its own way it is quite remarkable, for it highlights the dawning realisation among bankers that advertising could influence public awareness of banks and the services they offered.

| Advertising could influence public awareness of banks and the services they offered.

From its foundation in 1833, London & Westminster Bank had been unusually alert to the value of advertising. It spent heavily on advertising its own launch, engaging one of London's earliest advertising agencies, Lawson & Barker (later known as Charles Barker). Some years later, it began to issue circular notes, which allowing travellers to draw cash from correspondent banks all over Europe. This was one of the first products that banks began to offer beyond simple current and deposit accounts. It was not surprising that London & Westminster was keen to advertise its new service.

The front page of The Athenaeum was a bold choice. First published in 1828, The Athenaeum was one of Britain's most widely circulated and influential weekly literary reviews. In 1846, when this advertisement appeared, it had a circulation of 18,000 copies per week. An advertisement here would certainly reach a large number of potential customers, but - to maximise exposure - the bank also placed equivalent advertisements in a range of other publications.

As discreet and understated as it may seem to us now, it was to be many decades before banks would try anything more daring than this in their efforts to advertise their products.