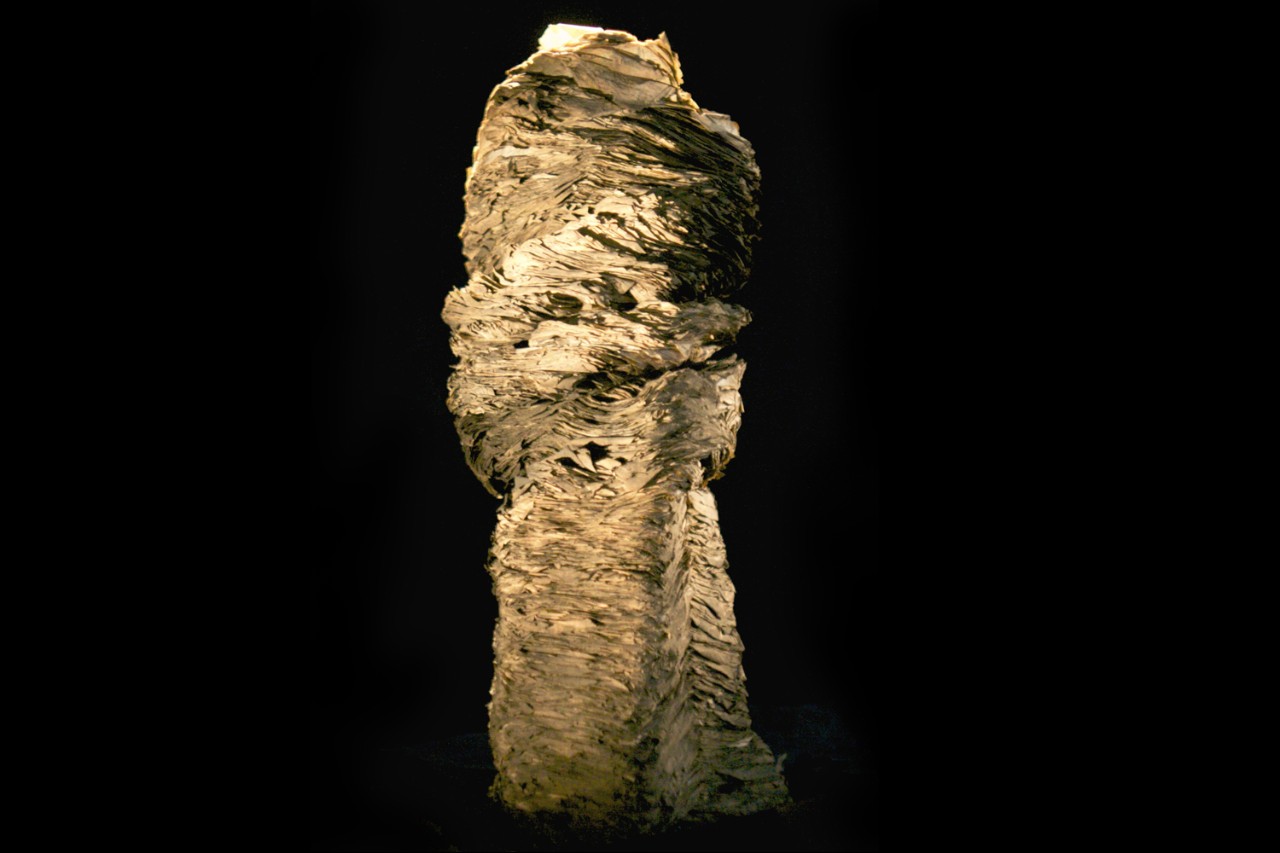 This mysterious item may seem hard to identify, but it's an example of something very familiar to anyone who's ever worked in an office: a filing system.

Filing may not be glamorous but it is important, and always has been. In essence, it's storing records in a way that ensures they can be found again when they're needed. The word 'file' is derived from the Latin filum, meaning 'thread', and was first used to describe stringing documents onto a thread or wire to keep them in order.

This object is not far removed from those earliest files. At its core is a long iron spike, completely hidden by around 5,000 used promissory notes that have been piled onto it, creating a swirling tower of paper. The blackening around the edges is often mistaken for fire damage, but is actually just the accumulated dust of 200 years in a forgotten basement.

The clerks who created this file worked for Drummonds Bank, which had been founded in London in 1717. By 1781, when the file was made, there were 10 clerks in the Drummonds office. They served a prosperous clientele of aristocrats, bishops, lawyers, doctors, military men and industrialists. It was relatively well-paid work, with salaries ranging from £30 to £130 a year.

One of their tasks was processing the payment of promissory notes. These notes were made out individually at the request of clients who wanted to make a payment of some kind. The payee would be given the note, which he would take to the bank to get his money. The bank would pay him, debit the amount from the customer's account, and tear a corner off the note so it couldn't be reused. It would then be filed onto a spike - a very quick and easy way of keeping notes firmly in order of processing.

Old notes would probably never be needed again, but just in case, the spikes were kept. If a problem came up, all the clerk had to do was check the relevant date in the ledgers, then go back to the stored spikes and find the note.

This file languished in storage for much longer than the clerk who put it there might have imagined. Over 200 years later it was found, along with several others, in a basement at the Drummonds office. Some were dismantled so that the notes could be cleaned and conserved. This file, however, was kept just as it was, offering an intriguing glimpse of the working lives of the clerks who created it.