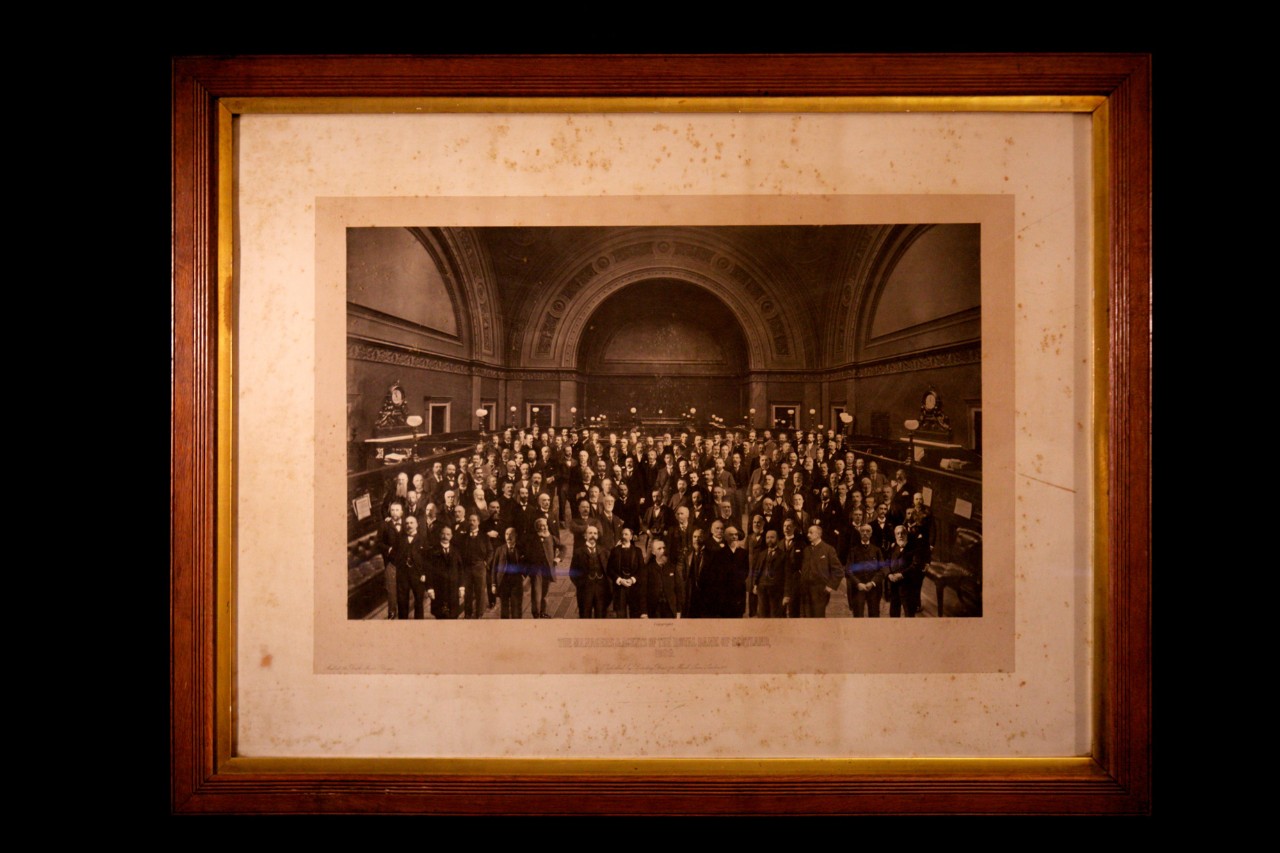 Montage photograph of the managers of The Royal Bank of Scotland, 1899

This picture shows all the branch managers and top head office officials of The Royal Bank of Scotland in 1899, together in the banking hall of its flagship branch in Edinburgh; quite an occasion. Or it would have been, if it had ever happened. In fact, this photograph is a trick. The managers were all photographed separately, and then their images were resized, cut out and stuck into a montage to create a group photograph.

Although all the men in this photograph were bank managers, their working lives and responsibilities differed widely. Some were lifelong bank men, full-time officials quite like a modern bank manager. Others fell into the older category of 'agent'; representing, but not strictly employed by, the bank in a given town or village. Many of these agents combined their bank duties with another career - most commonly in the legal profession, but in some cases as a doctor or man of independent wealth. Some of the managers from bigger towns and cities were in charge of a large staff, while others ran more modest operations, with the help of just one or two juniors. It would have been extraordinarily difficult, expensive and damaging to business to bring all 144 men together in Edinburgh.

| a chance to glimpse the bigger picture, and see themselves as part of it

Montage photographs were fashionable in the 1890s, and quite a number of banks and other businesses commissioned them. For The Royal Bank of Scotland, it was an impressive way of demonstrating how its business had grown. It had been relatively slow to begin establishing a branch network. Just 50 years earlier, an equivalent image would have shown just seven branch managers.

Now, in 1899, there were men whose job it was to represent the Bank in 134 different communities across Scotland, plus an office in London.

For the men in the montage, meanwhile, it must have been exciting and inspiring to see themselves there, surrounded by colleagues from around the country, in a team photo. To those who worked day-to-day in little country offices, perhaps with only a teller for support, it was quite literally a chance to glimpse the bigger picture, and see themselves as part of it.