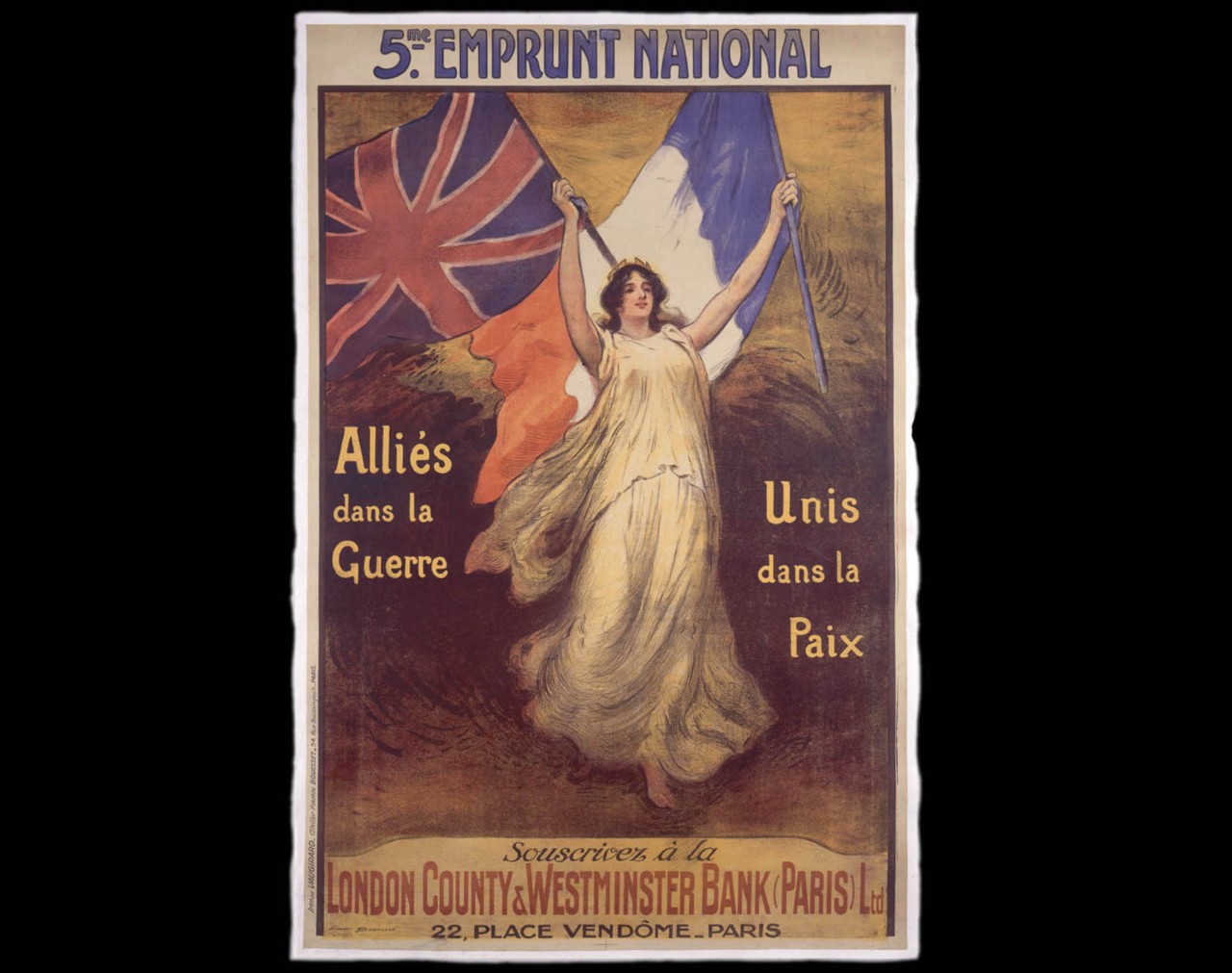 The modern poster was born in Paris. In the late 19th century the city's simple advertising placards evolved into art, with legendary names such as Toulouse-Lautrec and Mucha creating works that hung in the streets, but were fit for galleries. For this reason, an English bank hoping to be taken seriously in Paris knew that its posters - like this one issued in 1919 - had to be of a high standard.

It was one of a series designed for London County & Westminster Bank (Paris) Ltd by the famous poster-artist Etienne Maurice Firmin Bouisset. He had already created iconic designs for popular French brands, including LU biscuits and Menier chocolates. Here, he depicts Marianne, the national emblem of France, waving both the Union flag and the Tricolore. The slogan means 'Allied in war, united in peace'. The British flag is prominent, as is the bank's unmistakably English name, but the symbolism and style could not be more French. The poster makes a virtue of the bank's Britishness - an asset in the immediate aftermath of the First World War - while simultaneously asserting its fundamental Frenchness.

| the poster's artist, imagery and style had been carefully chosen to convey a certain message

London County & Westminster Bank (Paris) Ltd had been established in 1913 as a subsidiary of the London-based London County & Westminster Bank. Despite the enormous challenges presented by the outbreak of war the following year, the bank persevered, and by 1919 had opened four further branches in provincial French cities. It catered for Britons in France, many of whom were attracted to its familiar name, but it also sought French business.

The direct purpose of this poster was to attract public subscriptions to the French government's fifth national loan. During and just after the First World War all the combatant nations relied heavily on loans of this type to finance their war and reconstruction efforts. Banks were called upon to support these loans, both as direct investors and as collectors of public contributions. London County & Westminster Bank (Paris) was determined to show that it was just as committed to French national goals as any home-grown bank, so it worked hard to attract public subscriptions to the loan. Potential investors were invited to bring their subscriptions to the bank's office at 22 Place Vendôme, one of the smartest addresses in Paris. This was an address which, much like the poster's artist, imagery and style, had been carefully chosen to convey a certain message. This bank may have come from England, it says, but it truly belongs in the heart of Paris.