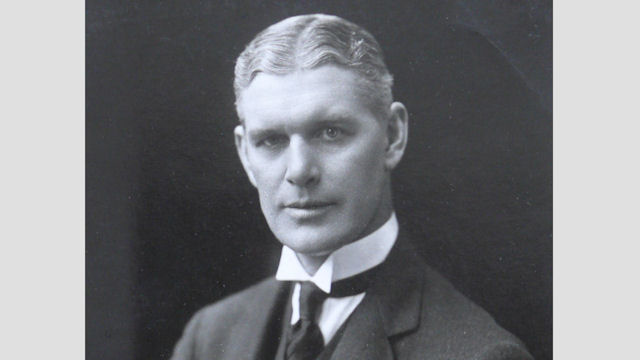 In September 1893, not long after his 15th birthday, William Whyte went to work as an apprentice in Kinross branch of the Royal Bank of Scotland. Six years later he transferred to the much larger branch at Ayr, and then the following year, 1898, he became Accountant at Saltcoats branch.

In February 1899 Whyte transferred to the bank’s London branch. This was a prestigious appointment; since the branch had first opened in 1874, a number of the bank’s most senior appointments had been drawn from among its staff.

In February 1929 he returned to Edinburgh, becoming Deputy General Manager of the bank. The following year he was closely involved in negotiations for two major acquisitions by the Royal Bank of Scotland; of the Manchester-based high street bank Williams Deacon’s, and of the Bank of England’s London Western branch.

In September 1933 the Royal Bank of Scotland’s General Manager Alexander Kemp Wright died suddenly. William Whyte, his deputy, was called back from holiday to take control, and within days was formally appointed to the post of Cashier and General Manager. He remained at the helm throughout the turbulent 1930s, through the significant acquisition of the merchant bank Glyn, Mills & Co in 1939, and into the difficult years of the Second World War.

In January 1944 William Whyte was appointed to the board of the bank. At the beginning of May that year, he retired from the post of Cashier and General Manager. Reporting his forthcoming retirement, The Times called him ‘perhaps the best known of Scottish bank managers.’

Other offices, interests and honours

He was a director of the Scottish Widows’ Fund; Scottish Agricultural Securities Corporation; and Railway Passengers’ Assurance Company.

He was appointed a Deputy Lieutenant of Edinburgh in 1940.

Whyte had been suffering from poor health for about three years when he died at home on 21 April 1945, just under a year after his retirement. He was survived by his wife and two daughters.