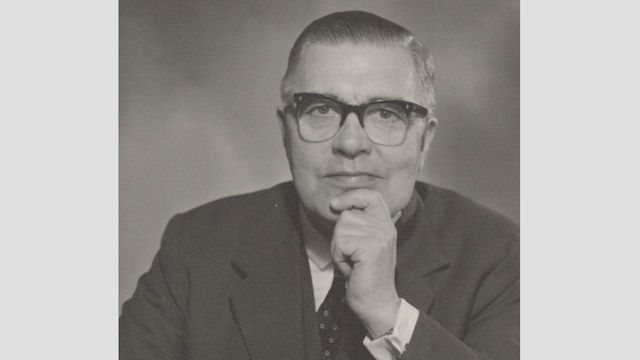 Walter Robert Ballantyne was born in Edinburgh on 2 June 1905. He was educated at Heriot’s School in Edinburgh.

In the course of his career, he obtained degrees in law from Edinburgh University and London University.

Walter Ballantyne began work as an apprentice at The Royal Bank of Scotland's Edinburgh Hunter Square branch in 1920, when he was 15.

In 1928 he transferred to head office.

In 1943 he transferred to the bank’s office in London, where he remained until 1946, when he returned to Edinburgh. In April 1947 he was appointed assistant secretary of The Royal Bank of Scotland.

From 1950 to 1952 he returned once again to London, this time as deputy manager of London City Office.

He was also a director of The Royal Bank of Scotland’s two English constituents Williams Deacon’s Bank Ltd and Glyn, Mills & Co.

Other directorships and business activities

Walter Robert Ballantyne and his wife Lottie joined the Scottish Youth Hostel Association in the 1930s, and he remained an active supporter of the organisation for the rest of his life, including serving as its chairman from 1958 to 1975.

He served as treasurer of various societies and charities, including:

He was a Justice of the Peace for the county of the City of Edinburgh. He was awarded an OBE.

He enjoyed swimming and water polo, and was honorary president of Portobello Amateur Swimming Club. He also played golf and enjoyed hill walking.

Walter Robert Ballantyne was married to Lottie Smith. They had one daughter together.