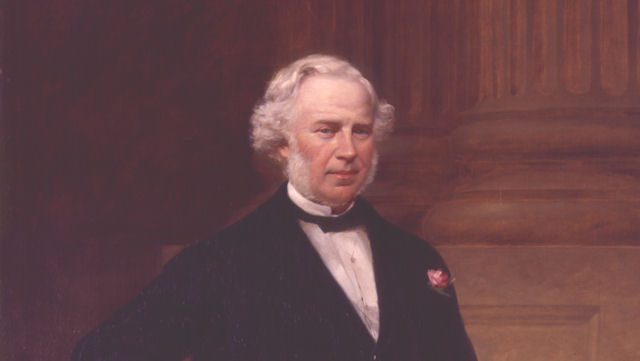 Thomas Ringland (1815-72) was an employee, and later director, of Ulster Bank.

Thomas Ringland was born in Killyleagh, County Down, on 4 February 1815. He was educated locally, but moved to Belfast in 1835 to attend, briefly, the Royal Academical Institution.

Ringland considered a career in the Church, but instead joined the newly-established Ulster Banking Company as a junior clerk in 1836. This bank, a Belfast-based shareholder-owned venture, had only just begun trading. It had been founded months earlier by a group of merchants seeking to improve banking facilities in the north of Ireland. From the outset, the new bank was determined to expand by opening branches in all of the principal trading towns in Ulster.

Such a new and fast-growing company created scope for rapid advancement, and the young Ringland’s talents were quickly recognised. In 1837 he was sent as accountant to the bank’s Downpatrick office, the sixth branch opened by the bank.

Ringland remained at Downpatrick until 1846, when he was appointed manager of Lurgan branch. There ‘his clear-sightedness’ and ‘his popular and frank manners’ built up the bank’s local business significantly. His success was rewarded by promotion, and in 1852 Ringland returned to the Belfast head office as bank secretary. He became general manager in 1853 and ten years later joined the board. He was the first director to have risen through the bank’s ranks, and the first member of the board to have practical banking experience.

From 1860 Ringland was also one of Standard Life Assurance’s earliest insurance agents in Belfast.

Ringland had enjoyed a classical education. He was well-read and widely admired as a learned philologist. He was also a justice of the peace.

Ringland married Christina Carr and the couple are thought to have had at least four children together.

Ringland died on 30 September 1872 at the house of his brother-in-law, Robert Morrison, in Prince’s Park, Liverpool, from a severe attack of bronchitis. He was later buried in Killyleagh. His obituary in Belfast Newsletter noted ‘As a man of sterling integrity, of clear, practical, good sense, and as a kindly, warm-hearted friend, Mr Ringland’s name will be long held in remembrance by Belfast’.