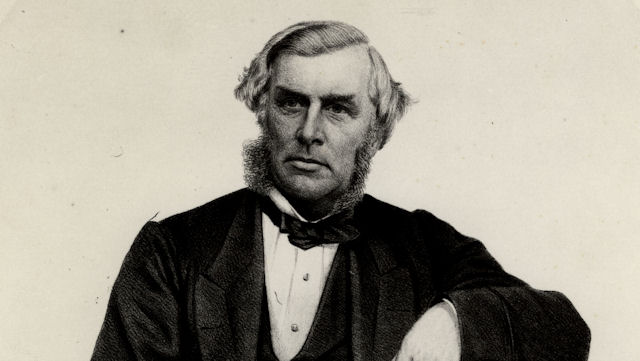 Thomas Lever Rushton (1810-83) was a solicitor, banker, iron merchant and mayor of Bolton. He was managing partner of Hardcastle, Cross & Co, 1858-78, and subsequently a director of Manchester & Salford Bank.

Thomas Lever Rushton was born in Churchgate, Bolton, on 5 September 1810. He was the eldest son of Thomas Rushton, a solicitor, and his wife Elizabeth, daughter of James Lever of Bolton. He was educated at Bolton Grammar School and a boarding school in Chester.

Thomas Lever Rushton served articles as a solicitor with his father, who was a partner in the Bolton solicitors’ firm of Cross & Rushton. He was admitted as a solicitor in 1831 and taken into partnership, after which the firm became Rushton & Son. In around 1850 Rushton acquired the business of retiring local solicitor Adam Hawarth to create a very large legal practice. He continued to work as a solicitor until 1879. In that year he served as president of Bolton Law Society.

Decades earlier, in 1818, Rushton’s father, along with four other local businessmen, had established a bank in Bolton. Hardcastle, Cross, Ormrod, Barlow & Rushton was Bolton’s first commercial bank. It flourished, eventually becoming known as Hardcastle, Cross & Co. Rushton senior died in 1838, and was succeeded in the banking partnership by his son.

In 1858 the bank’s managing partner, the son of another of the founding partners, committed suicide. Rushton succeeded him as managing partner. In that role he oversaw the construction of a grand new building for the bank on Bolton’s Deansgate, completed in 1875.

In 1878 he negotiated the sale of the business to the much larger Manchester & Salford Bank. Following the acquisition Rushton became a director of the larger bank.

From 1835 onwards Rushton was a partner (with James Eckersley) in a Bolton iron merchants’ known as Rushton & Eckersley, and later as Bolton Iron & Steel Company. He remained involved with the firm until 1858. During that time he formed a friendship with James Nasmyth, inventor of the steam hammer.

Thomas Lever Rushton played a prominent role in his local community. He was a member of the Board of Guardians for two years from 1840. From 1846 he served as a Conservative member of the Town Council, negotiating the transfer of the old waterworks to the corporation in 1847.

Despite initially opposing the incorporation of the borough, he served as mayor of Bolton, 1848-50. In that role, he presided over the extension of the authority of the council and was the prime mover behind the borough’s 1850 Improvement Act which led, among other things, to the erection of a purpose-built market hall, completed in 1855. In 1850 he was presented with a gold chain and seal for the use of himself and future mayors, the subscribers expressing gratitude ‘for the unwearied exertions which you have made and are making for the good of the town.’ Later, however, the schemes Rushton had initiated began to bring the council into debt and his mayoralty was retrospectively criticised. Rushton was consequently not re-elected to the council until 1868.

On 19 March 1843 Thomas Lever Rushton married Harriet Ann (1822-1904), daughter of John Sharp of Barnfield, Manchester. They had two sons and six daughters together:

Thomas Lever Rushton died on 8 February 1883 in a hotel in Cannes, France, where he had gone on medical advice. He was buried in Cannes.