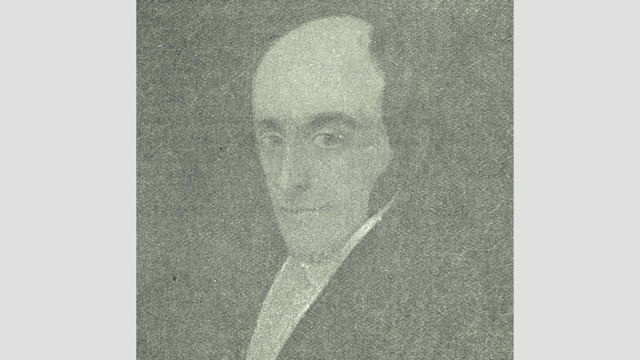 Thomas Joplin (c.1790-1847) was a banking theorist and leading advocate of joint stock banking in England & Wales. He was instrumental in the formation of National Provincial Bank.

Thomas Joplin was born in Newcastle upon Tyne in around 1790. He was probably the second son of Thomas Joplin, a local timber merchant.

Upon the death of Thomas Joplin senior in 1808 the timber business, based in New Road, Newcastle, passed to Thomas and his elder brother William, and was restyled W & T Joplin & Co. Joplin’s true interest, however, lay in monetary issues, banking and the promotion of joint stock companies. He had witnessed private bank failures in the north east of England, and his business contacts in Scotland had introduced him to the different banking system north of the border. These experiences fuelled his interest. He left the family firm, which was sold off between 1815 and 1819, in order to focus his energies fully on banking theory and reform.

Joplin was a prolific pamphleteer, and significantly influenced the transformation of the banking system in England and Wales in the 1820s and 30s.

Before the mid-1820s the Bank of England held a monopoly in England and Wales, forcing all other banks to remain small, local partnerships. Joplin was convinced that this structure was detrimental to economic growth and stability. He preferred the system in Scotland, where larger shareholder-owned banks were permitted, creating a better-balanced, more secure banking sector.

In 1822 Thomas Joplin openly attacked the Bank of England’s monopoly in his pamphlet An Essay on the General Principles and Present Practices of Banking in England and Scotland. The pamphlet outlined the difference between the two nations’ banking systems, and advocated the establishment in England of so-called joint stock (that is, shareholder-owned) banks, like those that already existed in Scotland. Its immediate aim was to encourage the people of Newcastle to start a public bank with local branches, but it soon attracted attention much further afield. It was reviewed in The Times, quoted by statesmen and went through several editions.

Joplin’s persistent advocacy played a significant role in converting the public to the idea of joint stock banking, although real change was not implemented until its necessity was underlined by the severe financial crisis of 1825.

In 1825 a major financial crisis threatened widespread commercial collapse throughout England and Wales. It was in response to this crisis that Joplin’s long-standing campaign for joint stock banking finally triumphed, but even in the more immediate term, Joplin’s influence was significant. As the crisis deepened in December 1825, Joplin published an article in The Courier, demanding that the Bank of England take action to stabilise the situation. The following day the Bank did just that, significantly increasing note issue. Joplin can thus be identified as the originator of the concept – more often attributed to Walter Bagehot – of the Bank of England as the lender of last resort.

Joplin did not limit his support for joint stock banking to pamphleteering. He also became more practically involved in establishing the first generation of such banks.

His first success in the field was in Ireland, where the formation of such banks became possible earlier than in England. Provincial Bank of Ireland was first projected in 1824 and opened the following year, based in London but operating branches in Ireland. It was to be run on the Scottish model, and Joplin was secretary of the promotion committee and later of the bank itself. However, by April 1826 he had left to pursue what he described as ‘other objects’.

His move may well have been prompted by legislative changes in 1826 which finally paved the way for joint-stock banks in England and Wales, as long as they were more than 65 miles from London. Indeed, it was Joplin himself who, upon examining the Bank of England’s charter, had realised that its monopoly on note issue was in fact no bar to the establishment of non-issuing banks.

Joplin’s great ambition had always been to establish a large, national joint stock bank. It was to this objective that he now turned his full attention. In 1826 he submitted a scheme to his cousin George Fife Angas for a federal association of numerous independent provincial banks which would be linked together by a central management structure. He proposed to call the new concern National Provincial Bank of England.

The late 1820s and early 1830s saw significant civil disturbances arising from agitation for parliamentary reform, so Joplin’s bank plan was not carried out until 1833, when National Provincial Bank of England was established, with Joplin as a director. His involvement was, however, destined to be short-lived. Following a series of disagreements with his fellow directors and the abandonment of the local shareholder system that was central to his vision, Joplin resigned from the bank in March 1835.

Joplin also helped to establish banks at Lancaster, Huddersfield, Bradford, Norwich, Whitehaven, Workington and Manchester, some of which became long-standing and influential regional banks. In 1839 he masterminded the reconstruction of Surrey, Kent & Sussex Bank to become London & County Banking Co, which eventually became Westminster Bank, one of the major high street names (along with National Provincial itself) that went on to become NatWest.

Throughout his life Joplin remained a maverick and an outsider, who found it difficult to work with others to bring his ideas to fruition and who was also little recognised by later observers. He favoured a combination of centrally- and locally-subscribed capital, so that local shareholders would only draw dividends from the profits of the local ‘branch’ in which they had invested. In practice this system proved unworkable, and Joplin’s continuing commitment to it caused conflict with fellow directors. Nonetheless, Joplin almost single-handedly established joint-stock banking in England and Wales. Today he is admired for developing, in the context of the Georgian period, a remarkably sophisticated macroeconomic model.

Joplin published more than 20 pamphlets on banking and political economy, including:

In the 1830s Joplin founded a newspaper called the Economist, ‘to protect the interests and defend the principles of joint-stock banking, at a time when they were in great danger of being impugned and misunderstood’. It failed in 1837, as did its successor the Atlas (c.1839-45).

Thomas Joplin married his wife Jane in the early 1800s. They had no children.

Thomas Joplin died of typhus, aged 57, on 12 April 1847 at Bohmischdorf, Silesia, where he was taking water treatment at a spa for his poor health. He was buried in a local graveyard.

He died a man of modest means, having gained little financially from his work.