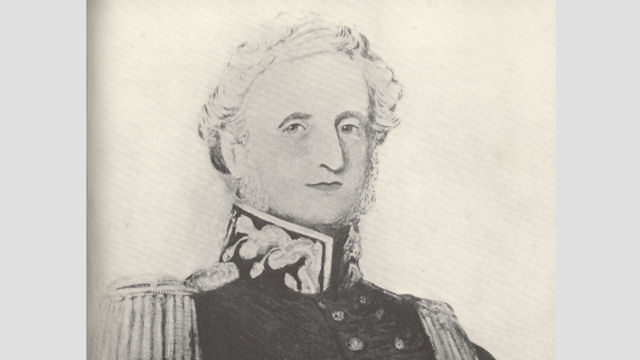 Robert Grimshaw (1783-1867) was a businessman and banker. He was one of the founders of Ulster Banking Company, and served as one of its two first joint managing directors.

Robert Grimshaw was born at Whitehouse, near Belfast, on 7 February 1783. He was the sixth child of Nicholas Grimshaw (1747-1805) and Mary Wrigley (d.1801). His father had moved from England to County Antrim a few years earlier, and had established Ireland’s first water-powered cotton-spinning mill.

Robert Grimshaw went into business as a merchant, possibly a drysalter, based in Mustard Street, later Waring Street, Belfast. He was also probably associated with one of the Grimshaw family’s textile firms, Thomas Grimshaw & Co, calico printers and dyers of Longwood.

As a businessman in early 19th century Belfast, Grimshaw would have been well aware of the need for better banking facilities in the north of Ireland. In 1824 he was a substantive shareholder in the new Belfast-based Northern Banking Company, the first joint stock bank to be established in Ireland. He later became a member of the bank’s advisory committee.

Some ten year later, in 1836, he was one of four founding directors of Ulster Banking Company, established to provide bank services in Belfast and the principal trading towns of Ulster. The agreement which established the new bank was signed at Grimshaw’s business premises in Waring Street. This was also the temporary home of the new bank until its own offices at 5 Waring Street were ready some weeks later.

Grimshaw was a founding shareholder, and later director and chairman, of Belfast & Northern Counties Railway Company (established in 1845 as Belfast & Ballymena Railway). He was also a long-term council member of the Belfast chamber of commerce, 1830-64, and its president, 1857-8.

Public office and other roles

Grimshaw took on a huge number of public duties. Keenly interested in developing local commerce, he was a member of the Belfast Ballast Board (later reorganised as Belfast Harbour Commissioners), a body responsible for the improvement of the port and harbour of Belfast. He was also one of the original five trustees of the Belfast Mechanics' Institute, founded in 1825 to provide self improvement opportunities for local working men. He remained a trustee until 1865, when the body was reformed as the People's Literary Institute.

He was a Justice of the Peace and Deputy Lieutenant for County Antrim 1856-7.

In 1812 Grimshaw married Arabella Duffin, daughter of Adam Duffin of Broughshane. The couple had 7 children, most of whom died in infancy.

On 9 December 1867, after attending a board meeting at Ulster Bank’s head office, he missed his footing at the top of the steps leading down to Waring Street, falling the length of the flight. He never regained consciousness and died later that day.

At the board meeting the following week his fellow directors applauded his fine personal qualities and impressive contribution to the bank over the last 31 years. They offered thanks for ‘his unwearied exertions and zeal in its service which ended only with his life’, noting that ‘He was a high minded and honourable man, and the public confidence inspired by his character – together with his great popularity and large experience in business affairs – were invaluable contributories to the success of the Bank’.