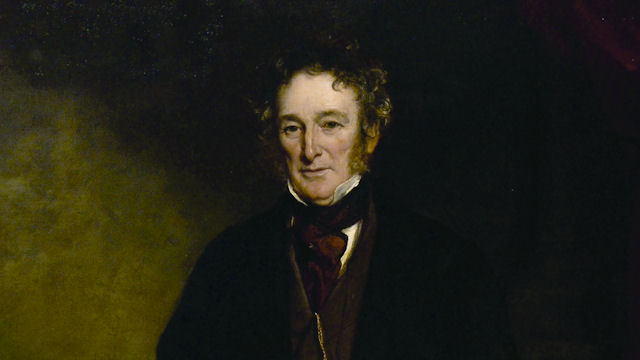 Peter Laurie was born at Saundersdeal Farm, Haddington on 3 March 1778, the son of John Laurie, a small landowner and farmer, and his second wife Agnes Thomson.

He was educated at Morham and Haddington Grammar School. He had originally planned to enter the ministry in the Church of Scotland but instead took up apprenticeships, firstly with his brother George in Jedburgh and later with Maxton, an Edinburgh sadler. After three years in Edinburgh, Laurie travelled to London to seek his fortune. He found employment with David Pollock of Piccadilly, saddler to King George III, and soon rose to be foreman in his workshop.

In 1801 Laurie established his own saddlery business on Oxford Street in London. The company became very profitable as a contractor to the Indian army. After having taken his nephew John Laurie into the partnership, Peter Laurie himself retired from the business in the 1820s.

Through his admission to the Saddlers’ Company and to the livery, Laurie became acquainted with London’s leading merchants and politicians. He first entered politics in 1823 when he was elected Sheriff of the city. He campaigned for the better treatment of prisoners and for more humane public hangings, which at this time were often ineptly managed, prolonging the convicted person’s suffering.

Laurie served as a magistrate for Westminster, and in 1826 he was elected alderman for Aldersgate. In 1832 he held the office of Lord Mayor of London. The following year he became master of the Saddlers’ Company.

Throughout his public life Laurie promoted schemes of social advancement and more open government. He opened the Middlesex bench hearings and Court of Alderman proceedings to the public. Several of his speeches and proposals were published as pamphlets, along with two books advocating prison reform. He was also President of the Brideswell and Bethlehem Hospitals. Peter Laurie was knighted in 1824.

The character of Alderman Cute in Charles Dickens’ story The Chimes (1844) is a satirical representation of Laurie and his (as Dickens saw it) dismissive attitude towards London’s poor. Later, Laurie had a further run-in with Dickens when he publicly denied the existence of Jacob’s Island, a London slum featured in Oliver Twist. Dickens devoted his preface to the novel’s first cheap edition (1850) to refuting and ridiculing Laurie’s denial.

In January 1839 Peter Laurie became the first chairman of the newly established Union Bank of London. He was appointed governor of the bank in April 1839. He held that position until his death over twenty years later.

On 1 January 1803 Peter Laurie married Margaret Jack, daughter of John Jack, at St Martin-in-the-Fields, London. They had met through their mutual attendance at the Scottish chapel on Swallow Street, London. They had no children, but adopted two of Laurie’s nephews, John Laurie and Peter Northall Laurie. Margaret died in 1848.