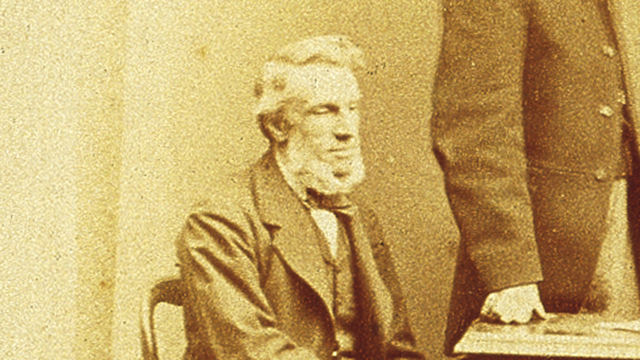 Oliver Heywood (1825-92) was a partner in Heywood Brothers & Co and later a director of Manchester & Salford Bank, and a prominent citizen and philanthropist in Manchester.

Oliver Heywood was born on 9 September 1825 at Irlams o’ th’ Height near Manchester, the son of the banker Sir Benjamin Heywood and his wife Sophia Ann Robinson.

He was educated at St Domingo House, Liverpool; Mr Mertz’s school, Manchester; and Eton. On leaving school he travelled abroad.

In 1845 Oliver Heywood went to work for his father’s firm Sir Benjamin Heywood & Co. In 1847, after coming of age the previous year, he became a partner. His three younger brothers also subsequently became partners in the bank.

Benjamin Heywood retired at the end of 1860. Oliver succeeded him as senior partner, and the firm became known as Heywood Brothers & Co. Under Oliver’s leadership, the bank maintained the reputation it had earned for prudence and reliability. Such qualities were particularly valuable in the financial crisis of 1866, when the collapse of the finance firm Overend, Gurney & Co provoked panic throughout the banking sector. Heywood, who was in London when the crisis began, witnessed much of the panic at first hand, and hurried back to Manchester to ensure that calm was maintained at Heywood Brothers. The bank survived the crisis almost unscathed, thanks in no small part to Oliver Heywood’s steady management.

In 1878 Oliver Heywood stopped attending the board (and was subsequently not re-elected) due to his lack of confidence in the bank’s general manager Thomas Read Wilkinson over the purchase of the Bolton bank Hardcastle, Cross & Co.

It was said of Oliver Heywood that ‘he took the deepest interest in all that made for the social, intellectual, material and moral welfare’ of Manchester. After his death, one obituary remarked that ‘it would be difficult to find a charity subscription list connected with any considerable institution in which his name is not represented.’ As well as donating money, he served on the governing bodies of numerous charities.

He was also involved with the District Provident Society, the Manchester Adult Deaf and Dumb Institute and the Manchester and Salford Penny Savings Bank Association.

In 1888 he was made Manchester's first honorary freeman, in recognition of all he had done for the city.

Oliver Heywood was a lifelong political Liberal, but unlike his father, who served as a Member of Parliament in the 1830s, he had no interest in a parliamentary career. He was asked on more than one occasion to stand as the Liberal candidate for Salford, but rejected the idea.

According to his obituaries, ‘he was naturally of a retiring disposition and cared nothing for mere display or ostentatiousness; he loved that which was simple, natural, real and earnest’; ‘unassuming and unaffected at all times, he had natural abilities and qualities which fairly entitled him to be ranked among the brightest and most accomplished of our leading citizens.’

On 7 September 1847 Oliver Heywood married Eleanor Barton, daughter of the Pendlebury merchant Richard Watson Barton. They initially lived at Acresfield, the house in Irlams o’ th’ Height where Heywood had been born. After Benjamin Heywood’s death in 1865 they moved to his house, Claremont, nearby. They had no children.

Oliver and Eleanor were married for 30 years, until her death in September 1877.

He was buried at St John's, Pendlebury, where his funeral service was conducted by the Bishops of Manchester and Guildford. Around 150 carriages took part in his funeral procession. Thousands of people turned out to see it, with 50 or 60 policemen on duty to manage the crowds. On the afternoon of his funeral, shops in Pendlebury and Irlams o’ th’ Height were closed as a mark of respect.

Within weeks of his death, arrangements were made in both Manchester and Salford to erect memorials in his honour. In Manchester, the memorial committee raised £2,665 from 332 subscribers to pay for a marble statue by the Irish sculptor Albert Bruce-Joy. It was erected in Albert Square in December 1894. The Salford memorial, a red granite obelisk by J & H Patteson, was also paid for through public donations. It was installed on Cross Lane, Pendleton in October 1893.