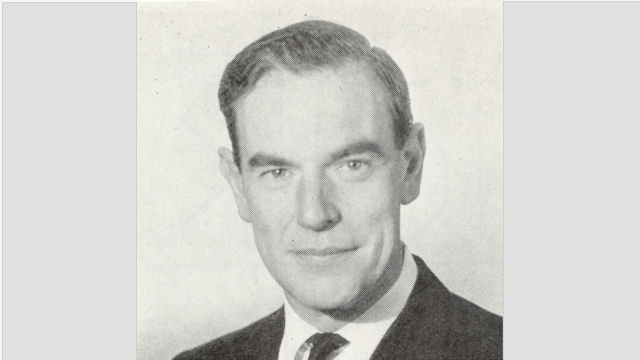 John Burke was born in Glasgow in 1924. He attended Hutchesons' Boys' Grammar School. When the time came to plan for his future, he concluded that banking 'seemed like a reasonable career'. He had an uncle who worked for National Bank of Scotland, so it was to this bank that he applied. He won a place as an apprentice, and started work in 1941.

The following year, upon reaching the age of 18, he joined the navy. His war service lasted until 1946, when he returned to civilian life, and to National Bank of Scotland.

After two years as the general manager's assistant, Burke was sent to London, where he spent time attached to various bodies on behalf of the bank. One key relationship he developed there was with the merchant bank J Henry Schroder, through which he developed a keen interest in merchant banking. In 1965, he used this interest to guide the formation of a Scotland-based merchant bank, a joint venture between Schroders and National Commercial, named National Commercial & Schroders. Burke was the new venture's chief executive.

Like the rest of the Group's board, Burke supported the proposed acquisition of The Royal Bank of Scotland Group by Standard Chartered Bank in 1981. When the Monopolies & Mergers Commission blocked that bid – and a rival one from HSBC in 1982 – the Bank had to enter a phase of serious reflection, reconsidering its approach to the future.

John Burke served as president of the Chartered Institute of Bankers in Scotland, 1973-5.

John Burke was married to Evelyn. They had a son and a daughter.

He was an enthusiastic and experienced hill walker. He died in a hill walking accident in Scotland in November 1983, at the age of 59. Charles Winter, his successor as managing director of The Royal Bank of Scotland, recalled him in obituaries as 'a good friend and a man who represented all the best things in Scottish banking.'