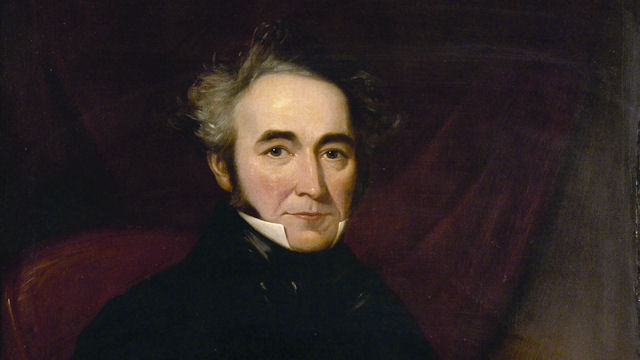 James William Gilbart was born in London on 21 March 1794.

In 1813 Gilbart began work as a junior clerk with a London bank. He remained there for the next 13 years, learning the practicalities of banking. In the financial crisis of 1825 his bank was one of the many that failed. This experience influenced him deeply, instilling in him a determination to deepen public understanding of the business of banking, and to advocate joint stock banking as a way of making England’s banks more robust.

Gilbart took a job as cashier of a large Birmingham firm, but he found the job unappealing and the city’s pollution damaging to his health. He soon returned to London where, in early 1827, he published A Practical Treatise on Banking. This influential work described and compared the banking systems of England, Scotland and Ireland.

Later in 1827 Gilbart was appointed manager of Kilkenny branch of the new Provincial Bank of Ireland, a joint stock bank founded by another proponent of joint stock banking, Thomas Joplin. In 1829, he was promoted to manage a larger branch of the bank at Waterford. He remained in Ireland for six years, throughout which period he continued to publish papers on banking practice, garnering him a growing reputation as a leader in his field.

In 1833 Gilbart received two separate invitations to manage new London-based banks. The post he accepted, and took up in October that year, was as general manager of London & Westminster Bank. The bank opened for business some months later, on 10 March 1834. It was the first joint stock bank in London, and eventually grew to become one of the largest banks in Britain.

As a pioneer of joint stock banking, Gilbart successfully negotiated the obstacles that arose from the Bank of England’s and the private banks’ continuing hostility to the new breed of banks. He gave evidence before various parliamentary committees, and played a key role in the formation of the Association of Joint-Stock Banks in 1838. Nevertheless, it was not until 1842 that the Bank of England opened an account for London & Westminster Bank, and joint stock banks were not admitted to the London Clearing House until 1854.

In 1860 Gilbart retired as general manager of the bank on an annual pension of £1,500. He remained on the bank’s board.

His writings on banking were highly regarded in his lifetime; his Practical Treatise ran into its sixth edition by 1859. In 1865 (after Gilbart’s death) his most influential works were republished in a six-volume collection.

A key theme in his writings was his belief that companies had not only rights but also responsibilities in society. These duties included being truthful, fair and reliable, as well as helping other companies in difficult times. He was, in effect, the country's first exponent of the idea of corporate responsibility in its broadest sense. He set down these ideas in 1846 in a pamphlet entitled The Moral and Religious Duties of Public Companies.

His writings have become classics of the banking profession’s literature and his name was permanently linked to banking education through the Gilbart Lectures at King’s College, London. Provided for by Gilbart himself before his death, these lectures took place annually from 1872 until 1998.

As a young man Gilbart was a member of two debating clubs in London – initially of the Athenian and later of the Union Club, a debating society founded by John Stuart Mill in 1825.

Gilbart was involved in the foundation of the City of London Literary and Scientific Institution, a pioneering organisation designed to further the education of the middle classes. He also founded the Waterford Literary and Scientific Institution on the model of the London one and gave a series of varied lectures there. Impressed by the Great Exhibition held in London, in 1851 he gave a £100 prize for the best essay on the subject of ‘The adaptation of recent inventions, collected at the Great Exhibition of 1851, to the purposes of practical banking’.

Gilbart was elected a fellow of the Royal Society in 1846 and was an active member of several other learned societies, including the Statistical Society to whose journal he was a contributor. He took part in the International Statistical Congress held in London in 1860.