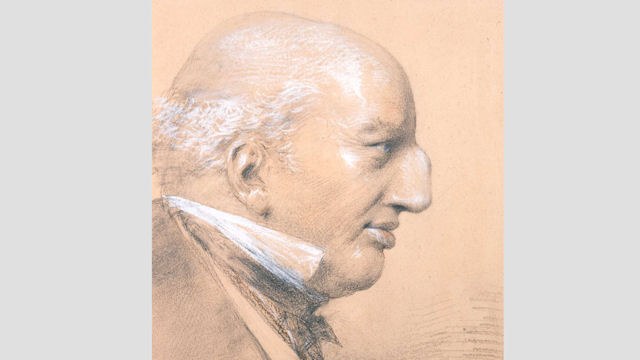 Henry Sykes Thornton was born on 28 May 1800 at Battersea Rise, a villa on the west side of Clapham Common in Surrey. He was the eldest son of Henry Thornton and his wife Marianne Sykes.

Henry Thornton was a partner in the banking firm Pole, Thornton, Free, Down & Scott. He was also a Member of Parliament, a political economist and a slavery abolitionist. The evangelical Christian group the ‘Clapham Sect’ met at the Thornton family home, and counted among its other members Henry Thornton’s cousin William Wilberforce, the famous campaigner for the abolition of slavery.

In 1818 Henry Sykes Thornton began his studies at Trinity College, Cambridge. While there he shared lodgings, and formed a lifelong friendship, with Thomas Babington Macaulay, who later became a noted historian and poet.

In 1822 Thornton went to work in his late father’s bank, Pole, Thornton, Free, Down & Scott. During his father’s time this firm had become one of London’s largest banks, acting as London agent for numerous provincial banking firms, known as ‘country banks’.

Thornton became a partner in the summer of 1825. Just months later the firm was engulfed in a widespread national financial crisis.

Economic conditions had been worsening for several months, but the crisis reached its peak in early December 1825. On Saturday 3 December, one of Thornton’s bank’s customers unexpectedly withdrew £30,000, leaving the bank dangerously short of cash. Fearing a run, Thornton contacted family friend John Smith, of the bankers Smith, Payne & Smiths, to ask for help. Smith provided all the cash his firm could spare. It was enough to tide Thornton’s bank over until the close of business that day.

Overnight, Thornton worked through the bank’s books. He concluded that the balance sheet was sound but that, should the bank by any chance fail, the consequences would be dire for 38 country banks.

Next morning (Sunday), a hastily-convened meeting between Thornton and the directors of the Bank of England was held at John Smith’s home. Thornton laid out the position for them. The directors, persuaded that the bank was essentially solvent but facing immediate dangers, agreed secretly to put a large sum of money at its disposal before business resumed on Monday. It is said that, as the bills were being counted out, the governor of the Bank of England told Thornton, ‘I hope this won’t overset you, my young man, to see the governor and deputy governor of the bank acting as your two clerks’.

One condition of the assistance was that Thornton’s fellow partners should take no further active role in the bank’s management.

The bank managed to continue trading throughout the following week, but the crisis deepened, with the collapse of a leading Yorkshire bank. On Saturday 10 December, aware of his bank’s exposure to some of the more vulnerable country firms, Thornton reluctantly concluded that, to protect the firm’s creditors, it was now necessary to suspend payments and look towards winding down the business. The suspension was implemented on Monday 12 December.

Thornton’s decisive handling of the crisis attracted widespread respect and admiration in the City. Before the end of the year he was invited to become a partner in a new banking firm, to be formed from the remains of his firm and of Williams, Williams, Burgess & Williams, which had also failed in the crisis.

The new firm, Williams, Deacon, Labouchere & Co, began trading on 2 January 1826. At that time it was also announced that Thornton would join the partnership as soon as the affairs of Pole, Thornton & Co had been wound up. Thornton was instrumental in the establishment of the new firm and was considered by his fellow partners to have a share in it from its start, although his name was not formally associated with the partnership until around 1828.

Thornton remained one of the bank’s active partners until his death in 1881. Unsurprisingly, in view of his experiences in the crisis of 1825, he persistently (and successfully) encouraged the bank to maintain a conservative outlook.

In the early 1830s Thornton was a partner in the Hull sugar-refining firm Thornton, Watson & Co. His uncle Samuel was also a partner.

In 1834 Henry Sykes Thornton was elected a fellow of the Royal Society. He was a liveryman and member of the Court of Assistants of the Goldsmiths Company. He was a member (possibly a founding member) of The Athenaeum.

In around March 1852 Thornton entered into a controversial second marriage. His bride was Emily Dealtry, younger sister of his first wife, a union which was prohibited in England under both church and state law. Thornton spent considerable money and effort trying to get a new Marriage Bill through the House of Commons so that the marriage could take place in England, but after that attempt failed, he and Emily travelled abroad – probably to Denmark – where their union could be recognised.

The controversial marriage strained relations with both family and colleagues. His fellow bank partners refused to allow him to remain a partner and live abroad on a long-term basis. Consequently he spent a number of years travelling between the continent and England before finally returning home to Battersea Rise.

Henry Sykes Thornton died on 29 November 1881. His second wife Emily died in 1907. In the same year, the law was changed to allow a man to marry his deceased wife’s sister.