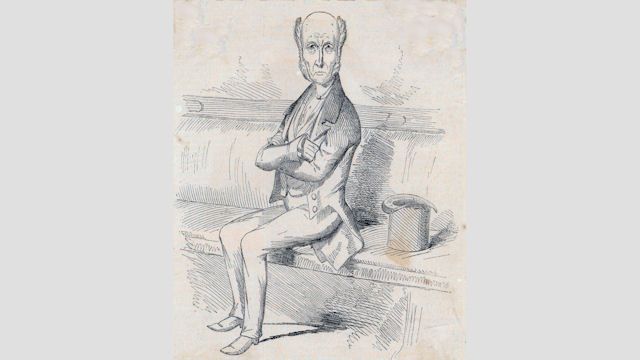 Henry Drummond (1786-1860) was an MP, religious leader and partner in the London bank Messrs Drummond.

Henry Drummond was born on 5 December 1786 at The Grange, Northington, near Alresford, Hampshire. His father was the banker Henry Drummond, son of Henry Drummond of the Grange and great-nephew of Andrew Drummond, founder of Messrs Drummond. His mother was Anne, daughter of Henry Dundas, 1st Viscount Melville.

In 1793 he became a pupil at Harrow School, where he was a contemporary of Lord Byron and Robert Peel.

His father died in 1794, when he was seven years old. In 1798 his mother remarried, and four years later left England for India with her second husband, James Charles Stuart Strange. Henry Drummond was left in the care of his maternal grandfather, Viscount Melville.

Henry Drummond attended Christ Church, Oxford, though he did not take a degree.

On 31 December 1811 Henry Drummond became a partner in his father's family bank, though for the first few months his involvement was restricted by the parliamentary commitments he had taken up the previous year. Andrew Berkeley Drummond, the bank's senior partner at the time, wrote to him 'on you principally must depend the prosperity & honour of our name & family…there are many reasons which convince me that hereafter the great ruling influence at Charing Cross must be with you.'

Drummond became senior partner in the bank in 1833, but his other interests occupied his energies and, to the irritation of his fellow partners, he was not active in the management of the bank. In 1844, following the death of his last surviving son the previous year, an agreement was put in place for his cousins to buy his hereditary share of the firm upon his death. The purchase was subsequently brought forward, and completed in 1846.

In 1810 Henry Drummond became Member of Parliament for Plympton Erle, Devon. He largely allied himself with Spencer Perceval, Robert Peel and other government supporters among his contemporaries. In 1812, possibly influenced by advice from Andrew Berkeley Drummond, he successfully introduced a bill creating safeguards against the embezzlement of customer securities by bankers. Shortly afterwards he stood down from parliament on health grounds.

He re-entered parliament in 1847, holding a West Surrey seat from then until his death in 1860. In contrast to his earlier period as an MP, he regularly contributed to debates, expressing forthright views on many subjects. Although by instinct a high Tory, he often spoke and voted independently.

He was a member of the Roebuck Committee, established to review the situation of the British army in the Crimean war.

In 1817, having sold his country estate, Henry Drummond set off with his wife for a tour of the Holy Land, but when en route in Geneva he met Robert Haldane, a leader of an evangelical Christian campaign to encourage followers of strict Calvinism to separate from the official church there. Henry Drummond stayed and took over the campaign, though when called to appear before Geneva’s council of state he decided to relocate across the border to Montauban, France. From there he financially supported various missionary activities and founded the Continental Society to support protestant teaching in Roman Catholic countries.

In 1825 Henry Drummond began to take an interest in the preachings of Henry Irving, whose focus on unfulfilled prophecy in scripture caught his imagination. Together with other interested parties they founded in 1826 the Catholic Apostolic Church, in which Henry Drummond was an 'apostle, evangelist and prophet'. In that year the first of five annual conferences was held at his country house in Albury, Surrey to study the prophecies.

In 1834 he went to Edinburgh to be ordained an 'angel for Scotland'. From that time his religious beliefs, writings and work for the church were the dominant features of his life. The church's influence spread to Europe (particularly Germany) and America. At Albury in 1840 Henry Drummond built premises for the Catholic Apostolic Church. He also paid for the building of a new parish church in the village of Albury, completed in 1842, to divert Anglicans from worshipping at the Norman church within his estate. For both new churches Drummond commissioned the architect William Macintosh Brookes. By the end of the 19th century the Irvingites, as they were known, had eight churches in London, the most prominent of which was in Gordon Square. Built in the early 1850s, its interior was designed by John Raphael Branden and partly financed by Henry Drummond.

Drummond was the author of around 140 works on religious subjects, including:

He also wrote on political and economic issues, including:

He compiled and published at his own expense a substantial and lavishly-illustrated genealogical work:

Although he was well known in parliament for his scathing attacks on political economists, in 1825 he founded the professorship of political economy at Oxford University.

In 1839 he was elected a fellow of the Royal Society.

Following the death of his father in 1794, Henry Drummond became heir to his grandfather Henry Drummond, who died in 1795. He received his substantial inheritance upon coming of age in 1807. In that year he undertook a tour of Russia and then, on 23 June, married his cousin Lady Henrietta (or Harriet) Hay-Drummond, eldest daughter of Robert Auriol-Hay Drummond, 10th Earl of Kinnoull. They had five children together:

Upon coming of age in 1807 Henry Drummond inherited the Grange, the house where he had been born. He sold it in 1817.

In 1819, following his return from France, he bought the estate at Albury in Surrey, where he engaged Augustus Welby Pugin to convert the house into a Gothic mansion. He became the main landowner in the area, known as a benevolent landlord and a pioneer of the allotment system, allowing his labourers as much land as they wanted.

Henry Drummond also had a London home in Belgrave Square.

Henry Drummond was known for his restless energy, even during his years of ill-health. Thomas Carlyle described him as 'a singular mixture of all things – of the saint, the wit, the philosopher - swimming, if I mistake not, in an element of dandyism'; 'a sharp, elastic, haughty kind of man' with 'a disorderly force of intellect and character.'

The Morning Post commented that 'he is tied by no pledges, desirous of no office, exposed to none of the temptations which lure the ambitious or needy.' He could also be antagonistic towards those whose views or beliefs differed from his own.

Henry Drummond died on 20 February 1860 at home at Albury. He was buried in the former parish church at Albury, part of which he had converted into a mortuary chapel to designs by Augustus Welby Pugin.