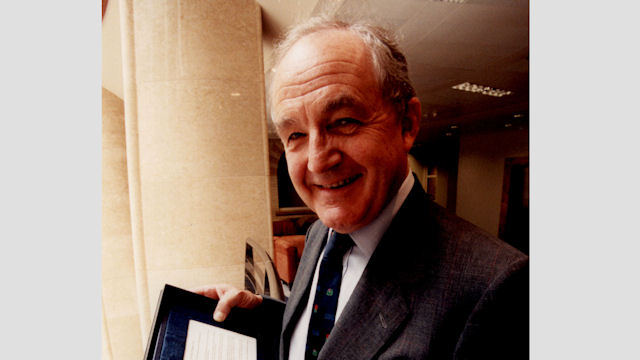 George Kenneth Hotson Younger was born in Stirling on 22 September 1931. He was the eldest child of Edward George Younger, 3rd Viscount Younger of Leckie, brewer and public servant, and his wife Evelyn Margaret, daughter of Alexander Logan McClure, an Edinburgh advocate.

Younger was educated at Cargilfield School, Edinburgh and Winchester College. Commissioned as a national service officer into the Argyll and Sutherland Highlanders in 1950, he was initially posted to 1st Black Watch in Berlin and later saw active service in Korea. He remained in the territorial army from 1951 until 1965, and was a brigadier in the Queen's Bodyguard for Scotland (Royal Company of Archers).

Upon completing his national service Younger read modern history at New College, Oxford. Afterwards, in 1954, he entered the family brewing firm, George Younger & Son of Alloa. He subsequently held a directorship in this company and in other Scottish brewing and distilling businesses.

Having unsuccessfully stood for parliament in North Lanarkshire in 1959, Younger was elected as Conservative MP for Ayr in the 1964 election. He served as a Scottish Conservative Whip 1965-7 and deputy chairman of the Conservative Party in Scotland from 1967. When the Conservatives won the general election in 1970 Younger became parliamentary under-secretary of state at the Scottish Office, where he focused his attention on economic development. He also served briefly as minister of state for defence just prior to the 1974 election.

In 1975 the new leader of the Conservative party, Margaret Thatcher, briefly promoted Younger to front-bench shadow defence spokesman. He later served as deputy shadow secretary of state for Scotland.

When the Conservatives returned to power in 1979 Younger – due to the unexpected defeat of Teddy Taylor – became Margaret Thatcher's first Secretary of State for Scotland, holding the post for over six years.

In 1986, when Michael Heseltine resigned from the cabinet over the Westland affair, Younger was promoted to Secretary of State for Defence. His past military connections made his a popular appointment among the services and he stoutly defended the ministry's budget.

Younger left the cabinet in July 1989 and stepped down as MP for Ayr in 1992. In 1989 and 1990 he helped to run Margaret Thatcher's party leadership campaigns, but he latterly became less closely involved in politics, due to his developing role at the Royal Bank of Scotland.

Younger presided over one of the most successful periods in the Royal Bank's history. A new, simpler divisional framework was introduced and the bank refocused on its core business of retail banking, culminating in the successful takeover of the much larger National Westminster Bank in 2000. Younger resigned from the chairmanship in 2001.

Younger was created a life peer in 1992 when he left the House of Commons. He took the title Baron Younger of Prestwick in reference to the long battle he had fought to retain Prestwick Airport as a transatlantic terminal.

When his father died in 1997 he succeeded to the viscountcy as 4th Viscount Younger of Leckie and transferred from the life to hereditary peerage.

Younger took on a number of voluntary posts. These included Deputy Lieutenant for Stirlingshire in 1968; chairman of the celebration of the 40th anniversary of the Queen's coronation in 1992; Chancellor of Edinburgh Napier University 1993-2003; Commissioner to the General Assembly of the Church of Scotland 2001-2; and chairman of the Former Royal Yacht Britannia Trust.

Honours awarded to him included:

Sir Malcolm Rifkind, his successor as Secretary of State for Scotland, commented in an appreciation in The Scotsman at the time of his death that he was ‘a splendid British statesman’ and that ‘there has hardly been a major Scottish institution that has not benefited from his voluntary services in recent times'.

Younger married Diana Rhona Tuck, daughter of Captain Gerald Seymour Tuck, on 7 August 1954. The couple had three sons and one daughter together.

Younger’s courteous and honest approach had earned him the nickname ‘Gentleman George’. In her memoirs, Baroness Thatcher said of him: 'His career is proof of the fact that, contrary to myth, gentlemen still have a place in politics.'Related publications and online sources