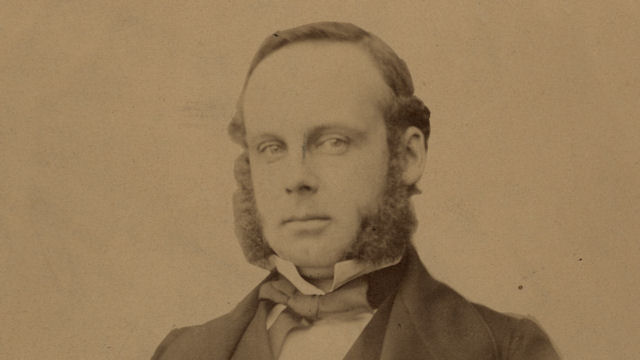 George Grenfell Glyn was born in London on 10 February 1824, the eldest son of George Carr Glyn and his wife Marianne. George Carr Glyn was a partner in Glyn, Mills & Co and Member of Parliament for Kendal. Marianne was the daughter of the late Pascoe Grenfell MP of Taplow House, Buckinghamshire.

George Grenfell Glyn was educated at Rugby School and, from 1842, University College, Oxford.

George Grenfell Glyn became a partner in the family bank in his early twenties, on leaving university.

In 1863 he led a group of financiers promoting the proposed new Anglo-Austrian Bank, which was intended to challenge the Rothschilds’ domination of Austrian government finance. The bank opened for business on 4 January 1864 with a starting capital of £2m. It continued trading until 1926, when it merged with British Trade Corporation to form Anglo-International Bank.

Later in 1866, George Grenfell Glyn withdrew from active bank life in favour of his political career, but he remained a partner in Glyn, Mills & Co until his death.

George Grenfell Glyn was elected Liberal Member of Parliament for Shaftesbury in 1857. He was a firm supporter and trusted confidant of William Ewart Gladstone.

In 1866 Glyn was asked to become Liberal chief whip, but refused the role unless he was permitted to remain a partner in the family bank. This raised a potential conflict of interests, since if the Liberals were subsequently elected to government, the chief whip would become one of the secretaries of the Treasury. It was eventually agreed that Glyn could accept the post if his partnership in the bank became an inactive interest.

As Liberal chief whip, Glyn brought together the whips’ office with the Liberal Registration Association into a single headquarters, thereby linking the Liberals in parliament much more closely with local Liberal party associations. After the Liberal party came to power in 1868, Glyn became patronage secretary to the Treasury.

In 1873 Glyn faced his toughest challenge as Liberal chief whip, during the deliberations on the Irish University Bill. Despite his best efforts, many Liberal Members of Parliament voted against the bill, causing political chaos nearly resulting in the collapse of the Liberal government. The administration was only saved by the Tory party’s refusal to form a minority government, leaving the Liberals weakened but still in power.

Glyn’s father died later in 1873, and George Grenfell Glyn inherited the title Lord Wolverton. He resigned his seat in the House of Commons and entered the House of Lords. At the same time he was sworn of the privy council.

Other roles and interests

George Grenfell Glyn served as chairman of the Flensburg, Husum & Tönning Railway Co, 1853-65, and as chairman of the Railway Clearing House from 1876 until his death. He was a shareholder in numerous other companies, including the National Press Agency, West of England Stud Co Ltd, The Westminster Review magazine and Shelton Iron, Steel & Coal Co.

He was a lieutenant of the City of London and a yeoman in the Dorset Cavalry under the command of Lord Ilchester.

George Grenfell Glyn divided his time between his London home and his country houses at Iwerne Minster, Dorset, and Coombe Wood, Kingston. He took a special interest in the village of Iwerne, where he and his wife supported two local orphanages. He also used his salary as Postmaster-General to fund beds in a London convalescent home for sick postmen.

He enjoyed yachting, hunting, riding and horseracing. He was Master of the Ranston Bloodhounds.

On 22 June 1848, George Grenfell Glyn married Georgiana Maria, daughter of the Reverend George Frederick Tuffnell of Uffington, Berkshire. They had no children.

George Grenfell Glyn died on 6 November 1887 at the Bedford Hotel, Brighton, while visiting the area to attend the races at Lewes and Plumpton. Gladstone recorded in his diary that ‘a great grief came to us today in the death of our warm and generous friend Lord Wolverton.’

His title passed to his nephew Henry Richard Carr Glyn.