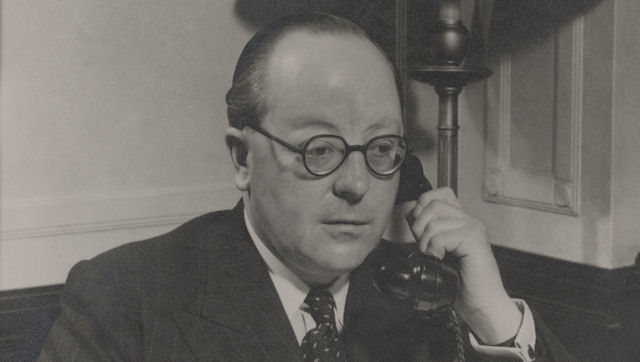 David Robarts (1906-89) was a director of Coutts & Co, chairman of National Provincial Bank and National Westminster Bank, chairman of the Committee of London Clearing Bankers and president of the British Bankers’ Association.

David John Robarts was born on 26 March 1906, the son of Captain Gerald Robarts. The Robarts family had a long and distinguished association with banking, dating back to the foundation of Robarts, Curtis & Co in 1791. This firm had later become part of Robarts, Lubbock & Co, which itself amalgamated with Coutts & Co in 1914.

Robarts was educated at Eton and Magdalen College, Oxford.

After Robarts, Lubbock & Co became part of Coutts & Co in 1914 the connection with the Robarts family was retained. Coutts was acquired by National Provincial Bank in 1920, and David Robarts himself went to work at the new parent bank, beginning his career in the Advances Department.

In 1931 Robarts succeeded his father as a director of Coutts & Co. From then until 1945 he worked full time at Coutts.

In 1945 he joined the private merchant bank Robert Fleming & Co as a managing director. He held that post until 1953, and subsequently remained a director until 1976.

In 1947 he also joined the board of National Provincial Bank. In 1950 he became deputy chairman, and in 1954, chairman. At 47, he was the youngest chairman of a ‘Big Five’ bank, and his appointment was greeted with enthusiasm. The Financial Times predicted that he would ‘do a great service to banking and prove one of the most acceptable heads of the Big Five known to the country for many a year’.

Robarts was chairman of the Committee of London Clearing Bankers and president of the British Bankers’ Association between 1956 and 1960. His period in office was extended from the customary two years to four years to help coordinate the banks’ response to the Radcliffe Commission’s enquiry into the working of the financial system. These years also saw other significant events in the banking sector, including the bank rate tribunal in 1957 and the end of the post-war restrictions on lending and competition in 1958.

Robarts served again as chairman of the Committee of London Clearing Bankers and president of the British Bankers’ Association from 1968 to 1970.

Between 1957 and 1965 David Robarts served as a Church Commissioner for the Church of England.

He served as High Sheriff of Buckinghamshire in 1963.

Robarts had a lifelong interest in agriculture, and ran a mixed farm at Lillingstone-Dayrell in North Buckinghamshire, producing milk, beef, wheat, barley and oats and breeding sows. Robarts believed in farming scientifically, and his farm conducted research work, sometimes in conjunction with the National Institute of Agricultural Botany.

In 1951 David Robarts married Pauline Mary Stoddart. They had four children together.