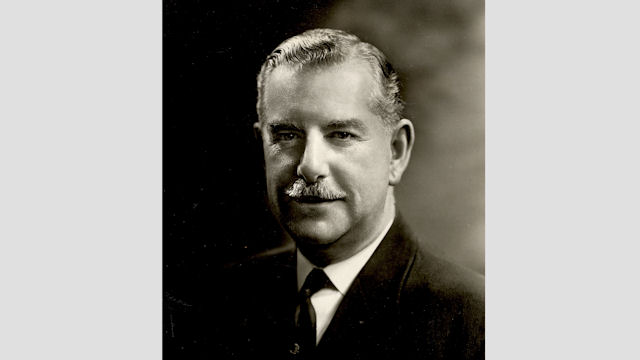 David Alexander was born in Brampton, Cumberland, on 26 April 1906, the son of David Alexander and his wife Helen Burns. He attended White House School, Brampton.

In 1923 Alexander went to work for National Bank of Scotland as an apprentice in its Edinburgh High Street branch.

In 1935 he was appointed to a post in the inspector’s dept. In 1939 he became manager of the bank’s Dundee Cowgate branch.

He returned to the head office inspector’s department in 1946, this time as chief inspector. The following year, he became superintendent of branches.

From the beginning, David Alexander encouraged the newly-formed National Commercial Bank of Scotland to be forward-looking, and to adopt innovations. One such idea that came directly from him was the establishment of a ‘ladies only’ branch. He had seen a branch of this type while travelling in New Zealand, and brought the idea back to Edinburgh, where Ladies' branch opened in the city’s West End in December 1964. The branch was intended to support female customers who might prefer to discuss their financial affairs with other women, and was therefore entirely staffed by women – including National Commercial’s first-ever female bank manager.

It was largely at Alexander’s instigation that the Scottish banks overhauled their systems of charging for banking services in the mid-1960s.

In 1967 Alexander was elected a vice chairman of the board of National Commercial Bank of Scotland. At the end of that year he retired from his executive duties at the bank, but retained his vice chairmanship.

Other offices and interests

David Alexander served as president of the Institute of Bankers in Scotland, 1959-61. He sat on the Committee of Scottish Bank General Managers for 13 years, 1954-67, including a period as its chairman.

He was involved with the Scottish Council (Development & Industry), Edinburgh Chamber of Commerce and Edinburgh Merchant Company. He sat on the boards of the Life Association of Scotland; William Bain & Co of Coatbridge; and Brown Brothers & Co of Edinburgh.

He was an elder in the Church of Scotland. He was the first honorary treasurer, and an active supporter, of the Friends of the Western General Hospital.

In 1937 David Alexander married Jessie Paton McMillan. They had two daughters. The family lived near Lauder in the Scottish Borders.

David Alexander died at home on 1 December 1972, at the age of 66. He was survived by his wife and two daughters.