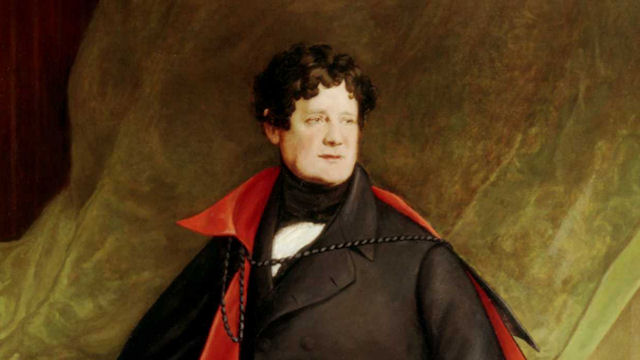 Daniel O’Connell (1775-1847) was an Irish Nationalist leader, known as ‘The Liberator’. He was an active participant in the foundation of National Bank of Ireland in 1835, and its governor from 1836 until his death.

Daniel O'Connell was born on 6 August 1775 near Carhen, County Kerry, the eldest of 10 children of Morgan O'Connell, a farmer and merchant, and his wife Catherine O'Mullane.

As a boy O'Connell was named heir to his uncle, Maurice O’Connell. Under his uncle’s patronage, he was educated at his house in Derrynane, at a small Catholic boarding-school near Cork, and at English colleges in St Omer and Douai, France. While in France, O’Connell witnessed at first hand the rough treatment meted out in the aftermath of the French Revolution, as well as the influence of Enlightenment ideas.

From 1792 legislation allowed Catholics to be admitted to the Irish bar and the young O'Connell determined upon a legal career. He was enrolled at Lincoln's Inn in 1794 and entered the King's Inns, Dublin, in 1796 where he completed his legal training. In 1797, in the panic following the attempted French landing at Bantry Bay, O'Connell enlisted in the volunteer Lawyers' Artillery Corps. He was called to the Irish bar in 1798 and went on the Munster circuit. There, thanks to his astute judgement and fine oratorical skills, he quickly became one of the most successful and sought-after barristers in the country.

In 1800, when the Act of Union abolished the Irish parliament, the seat of government transferred to London. In addition, although Ireland was about 85% Catholic, Irish Catholics were denied the right to become members of parliament and to occupy senior legal positions. O’Connell became actively involved in opposition to the union and repeatedly defended Catholics prosecuted in the courts for their opposition to the government.

Frustrated by the unfairness of religious discrimination, in 1811 O’Connell set up the Catholic Board to campaign for Catholic emancipation. Twelve years later, in 1823, he founded the more popular Catholic Association to mobilise mass support for broader electoral and church reform, tenants’ rights and economic development. This was the beginning of a movement of much wider agitation financed by the Catholic Rent which O’Connell introduced in 1824. The rent gave associate membership of the Association for 1d a month, and raised campaigning funds of some £20,000 by early 1825.

In 1828 O’Connell continued his campaign by putting himself forward for Parliament. He won a by-election in County Clare, even though as a Catholic he could not take up his seat in Parliament. The situation aroused widespread Irish agitation and the government, fearing civil war, reacted to the pressure by passing an Act delivering catholic emancipation the following year. O’Connell was re-elected unopposed and finally took his seat in Parliament in 1830. On entering Parliament O'Connell largely abandoned his legal career. He remained an MP for 18 years, representing County Clare (1829-30), County Waterford (1830-1), County Kerry (1831-2), Dublin City (1832–5, 1837-41), Kilkenny City (1836-7), Meath (1841-2) and Cork County (1842-7).

Once in Parliament, O’Connell led a party of 39 Irish MPs pledged to ending the union and introduced a parliamentary motion seeking its repeal in 1834. During the following years it was O’Connell’s leadership of the Irish MPs which kept Lord Melbourne’s ministry in office and as a result O’Connell had much Irish patronage placed at his disposal. When the Tories returned to power in 1841 he began, once again, to orchestrate campaigning agitation in Ireland, which reached a climax in 1843 when O’Connell was arrested, convicted of conspiracy and imprisoned. He was subsequently more cautious, but he continued to explore new campaigning initiatives and alliances for the rest of his life. Ultimately, however, the movement for repeal of the union failed.

O'Connell also campaigned for the reform of Ireland’s municipal corporations, which from 1840 placed city and town governments in the hands of elected councils. In 1841-2 O'Connell became the first lord mayor of Dublin and the first Catholic holder of the title since 1688.

It was O’Connell’s mobilisation of the working classes in a wholly new style of mass agitation that made him an unusual campaigner in his day and gave him, although essentially an Irish national champion, a European reputation. He was known as ‘The Liberator’ and his political campaigning was characterised by his repudiation of the use of violence, an approach born of his early experience of the French Revolution and his own interests and experience as a lawyer and landowner.

Less well known is O’Connell’s role as an advocate for the rights of civilly disadvantaged groups such as Jews, dissenters, black slaves and Australian Aborigines. As an MP he pressed for penal reform, free trade, trade union rights and secret voting; for the abolition of slavery; and the end of discrimination against Jews. He was a founder of the British India Society which campaigned against the abuses perpetrated by the British East India Company and European colonialism in Australia and New Zealand. British Prime Minister William Gladstone said of O’Connell that he ‘had energies to spare for whatever tended…to advance human happiness and freedom.’

O’Connell was involved in the foundation, in 1835, of a new Irish bank, National Bank of Ireland. He helped draw up the agreement that established it, spoke at public meetings to drum up support for it, invested in it, attended its first board meetings and, in 1836, was appointed its governor. He became an important figurehead for the new bank and there was even a proposal, not implemented, to put a bust of O’Connell on the bank’s notes.

National Bank of Ireland was established on the model devised by Thomas Joplin for Provincial Bank of Ireland in 1824, so that half of the profits would accrue to local shareholders in Ireland. The bank was a natural extension of O’Connell’s political campaigns - a universal bank formed to ‘preserve the banking system in this country from politics’. This new bank would inject cash into local economies and its services would be available to all, with no discrimination on grounds of religion or politics. National Bank of Ireland went on to become a significant force in Irish banking, and O’Connell remained its governor until he died in 1847.

His choice of a wife who lacked personal wealth was not welcomed by his uncle or his father, and both altered their wills to O’Connell’s disadvantage. Nonetheless, his inheritance from his father, which fell to him in 1809, included a lease of extensive portions of the Kerry estate of Trinity College, Dublin. His uncle’s death in 1825 also gave him Derrynane. These estates brought him a handsome annual income, but nonetheless his habitual generosity and hospitality kept him in debt throughout his life.

O'Connell died in Genoa on 15 May 1847, but his body was brought back to Ireland and is buried at Glasnevin cemetery, Dublin. Later one of Dublin’s principal streets was named O'Connell Street in his honour and the huge statue of O’Connell by John Henry Foley RA, unveiled in 1882, remains one of the city’s most prominent monuments.