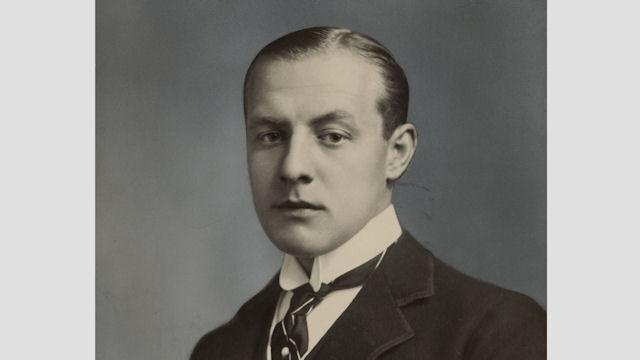 Charles Thomas Mills, known to his family as Charlie Tom, was born on 13 March 1887. He was the eldest son of Charles William Mills, 2nd Baron Hillingdon and his wife Alice Harbord. He had a younger brother, Arthur Robert Mills.

Mills was educated at New Beacon preparatory school, Eton and Magdalen College, Oxford. While at university he was a keen sportsman, representing Oxford in the varsity golf matches, 1907 and 1908. He took his degree in 1908.

The Mills family business was banking. Since 1793, members of the family – including Charles Thomas Mills’ father, grandfather and great-grandfather – had been partners in the London banking firm Glyn, Mills & Co.

In 1907 Charles Thomas Mills’ father was forced to retire from the business due to ill health. At that time 20-year-old Charles Thomas was still pursuing his education, but soon afterwards, in 1910, he continued the family tradition by going to work for Glyn, Mills & Co.

Despite onerous outside commitments he was actively involved in day-to-day business at the bank. One account fondly recalled the renown he had won with the bank’s clerks in an incident in which he had chased a thief out of the bank, finally stopping him by dragging him to the pavement in Lombard Street.

Also in 1910, Mills entered parliament with a resounding majority, as the conservative member representing Uxbridge. For his first two years in that office, he was the youngest member, known as the ‘Baby of the House’.

He was an active parliamentarian, speaking frequently on varied matters, including women’s suffrage, which he staunchly opposed in a speech in 1910. When asked how he managed to juggle his duties as a politician and a banker, he explained that he worked 14-hour days; all day at the bank and then all evening in parliament.

He continued to represent Uxbridge until his death.

For some years before the war Charles Thomas Mills had served as a lieutenant in the Queen’s Own West Kent Yeomanry, but in 1915 he arranged to be reassigned to the Scots Guards so that he would be sent overseas more quickly. Just before his regiment departed for France in June 1915 he was given a send-off by friends and colleagues in his constituency, at which he remarked: ‘I hope you will be good enough to think of me while I am away. I hope that you will pray that, above all things, I shall do my duty, very humbly it may be, and bring no disgrace upon you and upon my friends down here.’

In September 1915 he spent a week on leave at home, to see off his younger brother Arthur, who was about to depart for the Dardenelles with the West Kent Yeomanry.

On 6 October 1915, during the Battle of Loos, he was struck in the head and killed by a piece of shrapnel.

Charles Thomas Mills was the sixth member of parliament to die on active service during the First World War, and one of four who died in a single fortnight. He is commemorated on the Loos Memorial, France; the Private Banks Cricket and Athletic Club war memorial, Catford, London; the Glyn, Mills & Co war memorial, London; and in the book of remembrance in the House of Commons Library.