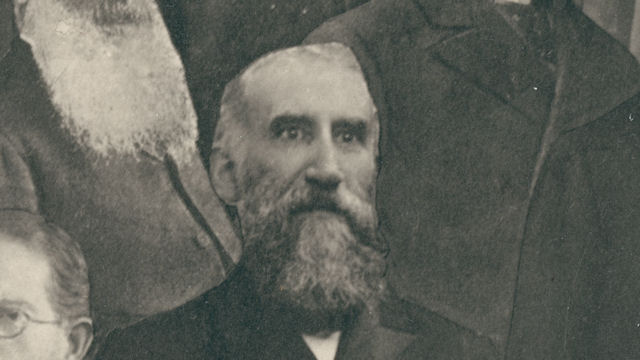 Andrew Kerr (1848-1934) was a banker, author and leading figure in the establishment of the Institute of Bankers in Scotland. He worked for the Royal Bank of Scotland, 1864-1920.

Andrew William Kerr was born in Edinburgh in around November 1848, the third son of Andrew Armstrong Kerr and his wife Jane Donaldson Mackenzie. Andrew Armstrong Kerr was a banker who had begun his career in the private bank of Robert Allan & Son in about 1823, but had worked for the Royal Bank of Scotland at its head office in Edinburgh since about 1825. In 1842 he was promoted to the post of teller, and by 1875 he was head office cash keeper. He never retired and died in 1883, having completed 57 years in the Bank’s service.

Andrew William Kerr had four brothers (of whom one died in infancy) and three sisters. One of his brothers, Henry Francis Kerr, became a noted Edinburgh architect.

In 1864, at the age of about 16, Andrew William Kerr went to work at the Edinburgh head office of the Royal Bank of Scotland, where his father already worked as teller and, later, as cash keeper. Kerr remained at head office for over 30 years. In May 1887 he was appointed to live in the lodgings above the bank, an arrangement which the bank had traditionally maintained to ensure that an official was available onsite in case of out-of-hours emergencies. He continued to live there with his wife until at least 1904.

In 1898 Kerr was appointed agent of the bank’s Edinburgh Hope Street branch. He remained there for the rest of his career. He retired on 10 April 1920, at the age of 72.

Institute of Bankers in Scotland

Andrew William Kerr was the moving spirit behind the formation of the Institute of Bankers in Scotland, the first institute of its kind in the world.

In 1874 he wrote an article in Money Market Review, advocating better education for young bankers. The article attracted attention in banking circles, and a committee was formed to discuss the idea. Kerr outlined his proposal to this committee and preparations began for the formation of what became the Institute.

The Institute of Bankers in Scotland’s inaugural meeting was held on 6 July 1875. Its first set of examination candidates sat their first exam papers the following year. Kerr served as the Institute’s first secretary and continued to hold that post until 1888.

The Institute’s success attracted attention outside Scotland. England’s Institute of Bankers was officially inaugurated in 1879, but even the previous year, its leading supporters were consulting Kerr on how to establish their system of examinations.

Banking
In 1884 Kerr published his History of Banking in Scotland. Scotland’s banking system was well-known and admired across the world, and its history was therefore of widespread interest. He dedicated it to the memory of his father, who had spent a 60-year career in Scottish banking, and had died the previous year. The book went through several editions, and remained the key text on the subject for nearly a century.

In 1898 he published Scottish Banking During the Period of Published Accounts, 1865-1896. This was the first attempt by any author to aggregate, compare and analyse the figures published by the various Scottish banks in their annual balance sheets.

Theology and religious affairs
Kerr’s publications in this field included:

Science fiction
In 1913 Kerr published a science fiction novel called Space – a Mirage. The novel tells the story of an interstellar civilisation of Celestials, which guide and protect the inhabitants of the planets, including Earth. A Celestial expeditionary army is being assembled on the planet Eretha, in preparation for an occupation of Earth. The book deals with Eretha and its conflicts with the neighbouring (and warlike) Sardonics.

Space – a Mirage is considered an early contribution to the development of the galactic empire concept which has come to dominate modern science fiction.

Andrew William Kerr was married to Anne Gray. They did not have any children. Anne was committed to improving educational standards. She was involved with the Edinburgh School Board for many years, serving as a Lady Manager and a member of the Board.

Andrew William Kerr was elected to the Fellowship of the Royal Society of Edinburgh in 1908.

He died at home in Edinburgh on 1 October 1934, a few weeks short of his 86th birthday. His wife had predeceased him.