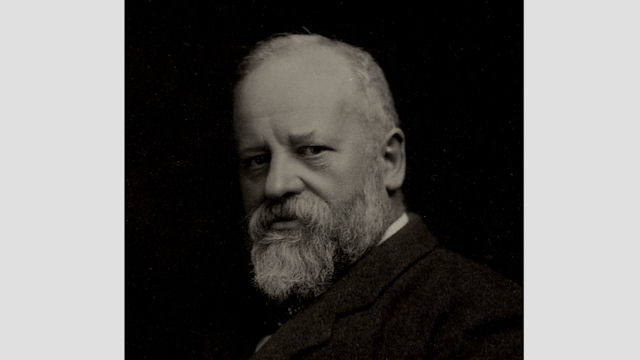 Alfred Spalding Harvey was born in 1840 in Colchester, Essex, the elder son of John Bawtree Harvey, a local Justice of the Peace. He was educated at London University, graduating in 1860.

On finishing his degree, Alfred Spalding Harvey joined the civil service, first in the Office of the Paymaster-General, and later in the Treasury, where he rose to the position of assistant accountant. In this post he began to write on financial subjects, and his work attracted the attention of the directors of Glyn, Mills, Currie & Co, who invited him to become the bank’s secretary in August 1880. He accepted, and began work on 1 September 1880.

As secretary to Glyn, Mills, Currie & Co, Alfred Spalding Harvey was responsible for supporting the partners in the day to day running of the bank. He worked closely alongside Bertram Wodehouse Currie, the bank’s senior partner, and the two men became close friends as well as colleagues. Both were practical in their approach to business, and had a shared interest in economics. From about 1885 until shortly before Currie’s death in 1896, they effectively controlled the bank.

During 25 years as the bank’s secretary, Harvey was responsible for overhauling numerous aspects of the bank’s operations, including introducing an up-to-date system of bookkeeping; reorganising the staffing structure; and starting the practice of publishing the bank’s annual balance sheet.

Alfred Spalding Harvey was a recognised authority on various economic, banking and taxation matters, and continued to be consulted by the Treasury, even after he had left its staff. In the aftermath of the Baring crisis of 1890 the Treasury asked him to report on the proposals for increasing bank reserves and the creation of a separate gold reserve by the issue of one pound notes.

He was active in the foundation of the Gold Standard Defence Association, a body formed to resist the adoption of bimetallism in the British currency system (source overview; PDF 22KB).

He was a director of the General & Commercial Trust Company, and of the East Kent Waterworks Company.

At the time of his death he was described as ‘a man of great ability, and distinctly representative of the best traditions of London’s commercial life.’

Alfred Spalding Harvey lived in Highgate throughout the latter decades of his life, and took a keen interest in all matters affecting the area. He was involved with several local charities, and a member of both Highgate Horticultural Society and the Chrysanthemum Society. He served as a vice-president and president of Highgate Literary and Scientific Society.

Alfred Spalding Harvey was married to Jane Goody, daughter of Henry Sidney Goody, a solicitor and alderman of Colchester. Together they had three sons and a daughter: Cecil, Eustace, Baldwin and Isabella.

He was succeeded in his duties at Glyn, Mills, Currie & Co jointly by his son Baldwin and Arthur Maxwell, who later became a partner in the bank.

On learning of his death, Lord Welby, former Permanent Secretary to the Treasury, commented that ‘in him the City and the public have lost a man of single uprightness, great public spirit and weighty authority.’