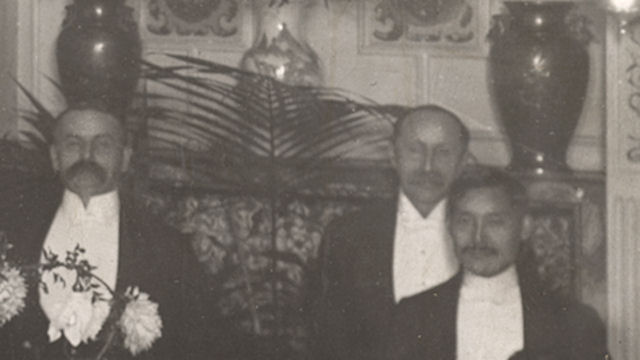 Image: Alexander Shand at a formal dinner with friends and colleagues, 1905. Shand is second from right. © RBS 2018

Alexander Allan Shand was born in Turriff on 11 February 1844. He was the son of James Shand, a surgeon, and his wife Margaret Allan. James died when Alexander was about 9 years old.

Shand probably started work in a Scottish bank in around 1859, and possibly later moved to a bank in London. By 1863 he had taken a job with Chartered Mercantile Bank of India, London & China, based in Hong Kong.

Early in 1864, when he was 20 years old, Shand was appointed acting manager of Chartered Mercantile Bank’s new Yokohama office. Soon afterwards he hired a messenger boy at the branch. The boy was Takahashi Korekiyo, who went on to become an important banker, finance minister and prime minister of Japan, and a long-standing friend of Shand.

In August 1872 the Japanese government employed Shand to work in its Ministry of Finance as an adviser on banking matters. The post was very well-paid; Shand received 450 yen a month, at a time when a government minister only earned 500 yen.

Shand wrote a five-volume work which was translated into Japanese by his colleagues at the Ministry of Finance and published at the end of 1873 as Ginkobokiseiho, or Detailed Accounts of Bank Book-Keeping. This book was Japan’s first introduction to western banking accountancy techniques.

In 1874 Shand devised a study and lecture course on public finance. It was provided by the banking science section of the Ministry of Finance, and was partly taught by Shand himself. In the next five years a total of 341 students undertook the course, of whom 118 worked in the Ministry of Finance itself; 42 in local government posts; and 181 in banks. The course was in effect the principal training received by Japan’s first generation of bankers.

In October 1874 Shand conducted Japan’s first western-style bank inspection, when he investigated what had gone wrong at the recently-failed house of Ono. One of Shand’s recommendations arising from the investigation was the establishment of a Japanese central bank, but it was not until 1882 that Bank of Japan was formed.

In 1877 Shand’s short book On Banking, or Ginkotaii, was published, and from 1877 to 1878 his manual for national banking in Japan was serialised in the magazine Ginkozasshi (or Bank Magazine).

In 1877 Shand and his family left Japan and returned to London.

Upon returning to London in 1877 Shand secured a job with Alliance Bank. When that bank merged with Parr’s Bank in 1892 he became manager of its London Lombard Street branch. He was later appointed manager of London Bartholomew Lane branch.

Despite his management positions in Parr’s Bank, his true significance to the bank came about through his background in Japan. In the early years of the 20th century the Japanese government raised a succession of loans on the London money market, and Parr’s Bank – guided by Shand – played a central role in arranging them. Shand had unique insight into the structures, protocols and expectations of finance in both east and west, and he still had many important friendships in Japan as well as in London. He acted as a bridge between the Japanese authorities and the western banks, and was the only westerner the Japanese consulted at every stage of their preparations.

Alexander Shand retired from his management role in the bank at the end of 1908. He then served as a director from 1909 to 1918.

In recognition of his help, the Japanese Emperor bestowed several honours upon Shand:

In about 1870 Alexander Shand married Emmeline Christmas. Their first children were twins, a boy and a girl, born in 1871. In the summer of 1873 the family visited Hakone Lake on holiday. While there the boy, Montague, fell ill and died. He was buried there. After the Shand family returned to London in 1877 Japanese friends ensured the maintenance of the grave, including having it restored after it was damaged in the 1923 Tokyo earthquake.

The Shands had 6 more children.

Alexander Shand retired from his active banking career in 1908. He served another ten years as a director of Parr’s Bank. Throughout that period, and for the rest of his life, he retained his interest in Japanese affairs, and management at Parr’s Bank (later Westminster Bank) continued to consult him informally on aspects of their Japanese business.

Shand initially retired to Chudleigh, Devon, and then to Parkstone, Dorset, where he lived with his daughters Ida and Winifred. He died there on 12 April 1930.