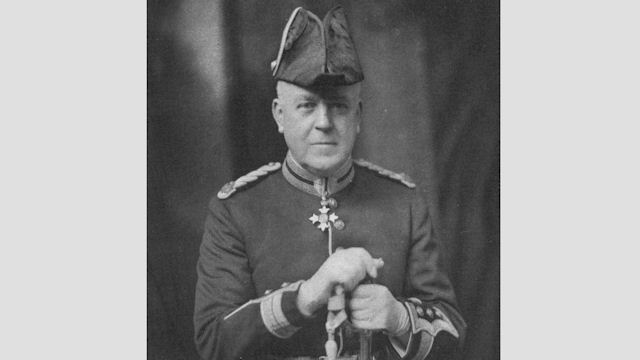 Alexander Kemp Wright was born in Methven, Perthshire, in 1859. He was the son of Andrew Wright, a shoemaker, and his wife Isabella Kemp. He had four siblings, including a brother called Robert and at least two sisters.

He was educated in Methven, then at Perth Academy and later at Edinburgh University, where he earned first class honours in Scots Law and Conveyancing.

Wright went to work in the Perth branch of the Royal Bank of Scotland in 1874, when he was 15 years old. Four years later he transferred to the bank’s head office in Edinburgh, where he worked in the inspector’s department.

In 1891 Wright became head of the bank’s law department. From this point onwards, his career progression closely followed the template set by Adam Tait, the man who had established the law department 16 years earlier. In 1905 Wright became Superintendent of Branches, and in 1907, Secretary. Ten years later, upon Tait’s retirement, he became Cashier and General Manager of the Royal Bank of Scotland.

When he took over in April 1917, the First World War was at its height. Wright immediately became responsible for liaising with the authorities over the call-up of bank workers, trying to ensure that enough skilled staff were left behind to keep the bank running. He also spearheaded the bank’s involvement in government war savings initiatives (see separate section below).

After the return of peace in 1918, Kemp took the bank into new territory by leading its expansion into England. Recognising that Scotland, with its many banks, was already a very full marketplace, he needed to look elsewhere for any significant expansion of the bank’s activities. That process began in 1924, with the acquisition of Messrs Drummond of Charing Cross, London, and continued in 1930, when the Royal Bank bought Williams Deacon’s Bank and the Bank of England’s London Western branch. By the early 1930s Kemp had developed the Royal Bank of Scotland into an institution that was known and admired across Britain; certainly not one of the so-called ‘Big Five’, but a widely-recognised member of the next rank of British banks.

In 1929 the bank appointed William Whyte to the new post of Deputy General Manager, in order to ease the burden that fell upon Wright, then 70 years old. Nevertheless, Wright remained fully engaged in bank life, continuing to travel to London monthly to attend meetings in connection with its London-based businesses. He remained Cashier and General Manager of the Royal Bank of Scotland until his sudden death in September 1933.

Alexander Kemp Wright was a dedicated member of the Scottish Savings Committee from its inception as part of the war effort in 1916 until his death 17 years later. He was the only committee member to serve throughout that period.

The committee was originally formed in 1916 as part of the war savings movement, through which the government sought to raise money for the war effort through patriotic investments from companies and individual citizens. Banks were largely responsible for promoting, administering and selling war bonds and savings certificates.

After the end of the war national savings products continued to be issued on behalf of the government, but the moral emphasis shifted away from patriotic duty and towards the personal benefits of thrift and saving. Wright passionately believed in these benefits; one contemporary noted, ‘he had become more and more convinced of the value of thrift as an elevating and sustaining influence in the lives of men and women, and it was just this wholehearted belief in saving as a moral force that made him so persuasive and attractive a speaker at conference and district meetings.’

In 1921 he became deputy chairman of the Scottish Savings Committee, and in 1931, chairman. His expertise in savings matters resulted in his being invited to sit on two Treasury select committees:

He remained chairman of the Scottish Savings Committee until his death.

Alexander Kemp Wright was actively involved in several organisations connected to his banking career, including:

Alexander Kemp Wright served for six years as a manager of Edinburgh Royal Infirmary. He was honorary treasurer of the Officers’ Association, Scottish branch (Earl Haig’s appeal) from its institution in 1920.

He was a director of the P&O Banking Corporation, and of Scottish Equitable Life Assurance Society.

He was awarded a CBE in the New Year honours, 1922, and knighted in the 1926 birthday honours.

In 1931 he was awarded an honorary doctorate from Edinburgh University.

He was awarded the Commemorative Medal of the Estonian Red Cross (second class) in September 1927. He also held the Commandership (first class) of the Order of the White Rose of Finland.

In 1895 Alexander Kemp Wright married Josephine Campbell. They had two sons and three daughters together. Josephine died in 1912.

Alexander Kemp Wright died suddenly on 21 September 1933, while attending the funeral of a friend at St Mary’s Cathedral in Edinburgh. He had been at work in the bank as usual that morning, seemingly in good health. Obituaries were published in newspapers all over Britain and beyond. Tributes recalled ‘his unassuming manner without tinge of vanity or self-importance, his instinctive courtesy and whimsical humour, his transparent sincerity and kindliness.’ The Scotsman called him ‘shrewd, level-headed, alert, with a kindly humour, understanding others, interested in a logical and ethical interpretation of life, but above all, friendly, helpful and considerate.’