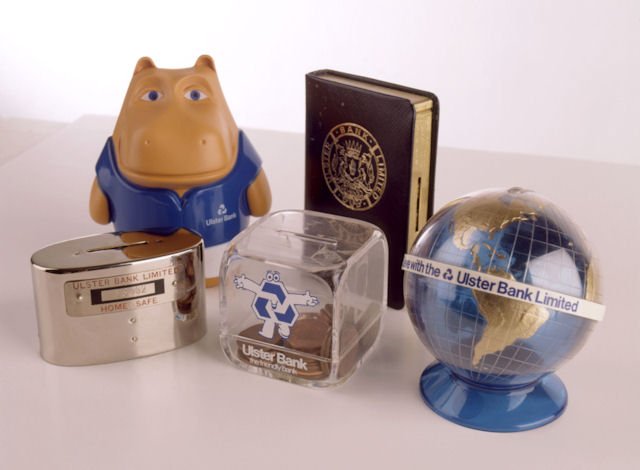 Image: a selection of home safes and money boxes produced by Ulster Bank during the 20th century © RBS 2018

Ulster Bank Ltd (1836-present) is part of the RBS group of banks.

This joint stock bank was established in Belfast after a meeting of local merchants resolved to establish their own bank, rather than a local partnership of the London-based National Bank of Ireland which would have diverted profits and deposits to England. The new bank opened for business in Waring Street, Belfast, in 1836 as Ulster Banking Co. It was managed by two directors, local merchants Robert Grimshaw and John Heron, and two assistant directors, and was administered following the pattern of the Scottish banks.

From the outset Ulster Banking Co issued its own banknotes and resolved to open branches ‘in the principal trading towns throughout Ulster.’ Within a year it had 9 branches in Ulster and had appointed correspondent banks in London, Liverpool, Birmingham, Dublin and the United States of America.

During the next two decades the bank survived various monetary crises and, due to the nature of its customer base, was less affected by the Potato Famine than the recovery of the Ulster linen trade. It opened a further 11 branches in Ulster, as well as a prestigious new head office at Waring Street, Belfast, in 1860. Thereafter, it established its first branches outside Ulster and in 1867 registered as an unlimited company. By 1877 the company's paid-up capital was £300,000 and it had opened many further branches in order to increase deposits. The growth of the bank prompted the adoption of limited liability, becoming Ulster Bank Ltd, in 1883. Paid-up capital amounted to £400,000 by 1886. The branch network continued to grow, spreading into Leinster, the expanding Belfast suburbs and Munster. During the First World War the bank provided gold to the government and participated in supporting war loan issues. Staff shortages, caused by workers serving in uniform, led the bank to employ women for the first time in 1915.

Consolidation in the UK banking sector, combined with the political upheaval which followed the Easter Rising in 1916, prompted the takeover of Ulster Bank by London County & Westminster Bank in 1917. Ulster Bank retained the same name and continued to be run independently by a Belfast Advisory Committee. The troubles attendant upon the establishment of the Irish Free State in 1921, and related bank boycotts and raids, alongside the challenge of establishing fiduciary issues and demands for a national loan, caused problems for the bank, but the political settlement of 1925 brought some stability. From the late 1920s the bank began to establish new services and departments, such as a Foreign Department in 1926 and thrift deposit accounts in 1928. However, the bank’s growth was limited after 1929 due to world depression and the collapse of the Belfast linen and shipbuilding industries. During the Second World War the bank suffered shortages and controls. Many staff enlisted, a number of Belfast branches were extensively damaged during air raids. The bank was called upon to handle clothing coupons, national savings certificates and transactions for US troops in Belfast.

In 1961 the management and capital of Ulster Bank was reorganised and a new board with defined functions and powers was appointed. During the 1960s many branches were renovated and new ones opened. Ulster Bank became the first Irish bank to introduce cash dispensers and the bank also set up merchant banking, factoring and unit trust management subsidiaries. In 1968 the new National Westminster Bank logo was adopted and in 1970 the Ulster Bank head office moved to Donegall Place.

During the 1970s the bank was affected by the Troubles. A number of branches were damaged by bombings and staff faced many challenges in their day-to-day work. In the same period the bank diversified into mobile banking, computer services, investment banking, offshore banking and dealing in the capital markets. During the 1980s problems caused by recession and competition had to be faced and in 1983 Ulster Bank became a private limited company under new company legislation. In the early 1990s expansion of branch network continued, particularly in the Republic of Ireland. A new head office was officially opened in Donegall Square East, Belfast, in 2000.

During 2001 Ulster Bank Group simplified its corporate structure by transferring its banking business in the Republic of Ireland to Ulster Bank Ireland Ltd. Meanwhile its growth continued in 2004 with the acquisition by The Royal Bank of Scotland Group of the Dublin-based mortgage and savings bank First Active plc.

Our archival records of Ulster Bank Ltd have the reference code ULS.