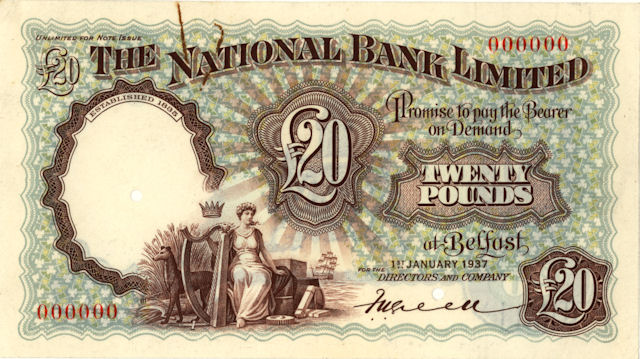 The National Bank Ltd (1835-1970) was a past constituent of The Royal Bank of Scotland.

This bank was formed as National Bank of Ireland in 1835. It was a joint-stock bank founded by a group of MPs and other gentlemen, including Daniel O'Connell. Frustrated by the exclusivity of the Bank of Ireland (est. 1783) and the English orientation of the Provincial Bank of Ireland (est. 1825), the founders aimed to form a bank both to provide capital for Irish economic development and to serve the needs of small traders and tenant farmers, as well as those of the gentry.

The bank's head office was located in the City of London, at 39 Old Broad Street and, although the majority of backers were English, the banking business was carried on entirely in Ireland. The bank's London agents were Barnett, Hoares & Co, bankers of Lombard Street, City of London.

Lamie Murray, manager of the bank, modelled the organisation on Thomas Joplin's Provincial Bank of Ireland - a joint-stock bank with branches operating as subsidiary companies, the shares being held partly by the parent bank and partly by local people. By the end of 1835 the bank had opened 11 branches and 18 sub-branches and an unsuccessful attempt had been made to establish a subsidiary company in Belfast, as the Belfast National Bank of Ireland. By May 1836 the bank had a paid-up capital of £374,140, of which £133,125 was subscribed locally in Ireland. In 1837, however, owing to administrative problems, the principle of the semi-autonomous branch was abandoned and the capital consolidated.

In 1845 the Irish Banking Act ended the Bank of Ireland's monopoly in and around Dublin, and a chief office of the National Bank in Ireland was immediately opened at 34 and 35 College Green, Dublin. The Act also fixed the banknote issue of the National Bank at £852,269. In 1847 the National Bank of Ireland also absorbed the London & Dublin Bank of Dublin, regaining a number of branches which it had established in 1837 and had had to dispose of because of their proximity to Dublin. In 1854 the bank opened its first branch in England at 13 Old Broad Street in the City of London, where the board had met since 1839. In 1856, the bank's name was changed from National Bank of Ireland to The National Bank Ltd and, in 1859, with a paid-up capital of £500,000, it was invited to join the London Clearing House. The expansion of the London business continued, and, by 1888, The National Bank was the eighth largest British bank in terms of authorised (£7.5m) and issued (£1.5m) capital and only four other banks had more branches in London. This growth was sustained with over 60 further branches opened between 1888 and 1922.

After the First World War the board, preoccupied with warding off take-over bids and coping with problems caused by the political and economic situation in Ireland, began to consolidate. The depression of agriculture had a detrimental effect on business, whilst the subsequent establishment of the Irish Free State had implications for the bank's shareholding, tax affairs and note issue. In 1922, therefore, when a parliament was re-established in Dublin, the bank formed an Irish board to manage the larger Irish side of the business. This did not however, solve all of the bank's problems, rather they were further compounded by the general economic recession of the 1920s and 1930s and the Second World War.

During the 1950s and 1960s, the expansion of the Irish economy provided much business for the bank, but, by the mid-1960s, it was apparent that it was no longer appropriate for such an important Irish bank to be controlled from London and operate as a member of the London Clearing. In 1966, therefore, the bank's business in Ireland was transferred to a new company, National Bank of Ireland, and sold to Bank of Ireland (est. 1783). The 36 English and Welsh branches passed to National Commercial Bank of Scotland, although The National Bank, with a paid-up capital of £3 million, continued to operate its branch network independently until 1970, when the branches became part of the new Williams & Glyn's Bank.

Branches: The bank opened 44 English and Welsh branches and sub-branches between 1835 and 1966, located in South Wales, London and other key English cities such as Liverpool and Manchester. In 1970 there were 38 branches operating in England and Wales.

Our archival records of The National Bank Ltd have the reference code NB.