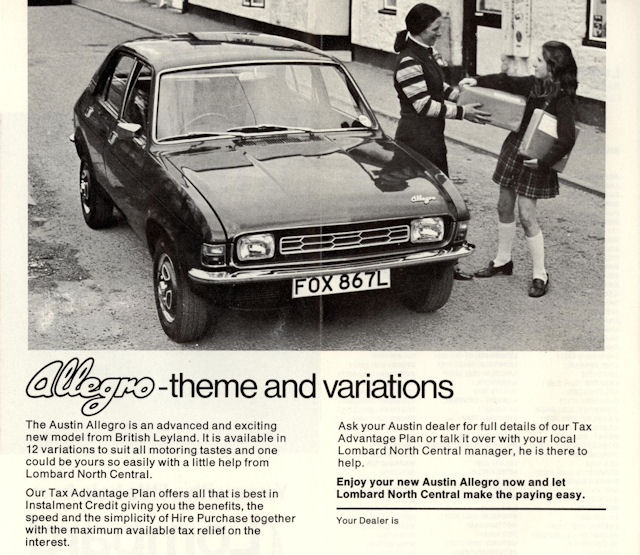 Lombard North Central plc (1971-date) is a constituent of The Royal Bank of Scotland Group.

Lombard North Central was created in 1971 by the merger, by Act of Parliament, of National Westminster Bank's two finance subsidiaries North Central Finance and Lombard Banking. The new company was organised in three divisions: Banking, Instalment Credit and International. It created a number of joint ventures during the 1970s, including British Leyland Finance and Farming & Agricultural Finance, and grew its 'big ticket' tax-based leasing for such items as aircraft, ships and petrochemical works. In 1984 a separate company, Lombard Business Equipment Leasing, was formed to finance the purchase of small assets like reprographics and vending machines. In the consumer finance market Lombard developed by growing its branch network, offering bespoke schemes for clubs and making Tricity Finance – which provided credit finance to more than 10,000 electrical, furniture, carpet and photographic shops – a wholly-owned subsidiary.

The 1970s also saw an increase in Lombard's motor finance, providing facilities to both dealers and their customers. In 1980 Lex Vehicle Leasing was set up to manage vehicle fleets. Joint ventures were established with a range of car manufacturers, including Jaguar, Alfa Romeo and Daihatsu, and later Porsche, Peugeot, Citroën, Nissan, Rolls Royce and Fiat. These deepening relationships were reflected in the company’s long-term sponsorship of the annual RAC Rally from 1978 to 1992.

Other types of business were also pursued. Lombard was a leader in the finance of leisure products, through links with clubs including the Royal Yachting Association and the Caravan Club. Lex Systems Leasing was launched to finance technology for the business equipment industry and Lombard Home Loans to provide house purchase loans to the general public. Uniquely within the finance sector, Lombard also continued to raise funds from depositors.

In 1986 a large new head office building was constructed at Redhill, Surrey. The deep recession of the late 1980s and early 1990s was, however, a difficult period and the company was restructured into three sectors: motor, business and personal finance. It moved away from first mortgages and set up Lombard Home Finance 1992 to provide home improvement, marine, caravan, health and education finance. The motor and consumer businesses remained strong, in part owing to Lombard’s offering of good point-of-sale technology and automated credit scoring.

Our archival records of North Central Finance Ltd have the reference code LNC.