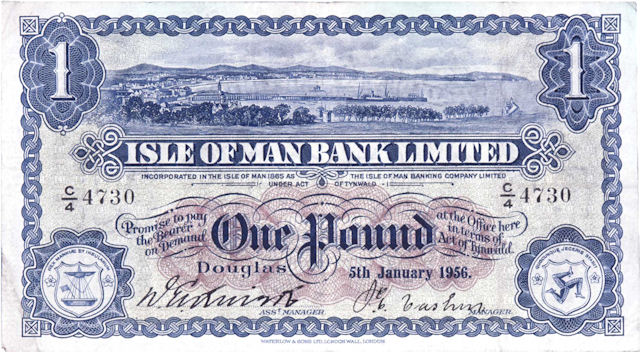 Isle of Man Bank Ltd (1865-date) is a constituent of The Royal Bank of Scotland Group.

This joint stock bank was founded in 1865 as Isle of Man Banking Co, following the passage of a law through the Isle of Man legislature allowing the formation of limited liability companies. The company issued its own banknotes from the outset and, by 1895, had opened branch offices in Castletown, Ramsey, Peel, Port St Mary, Port Erin and Laxey.

In 1961 Isle of Man Bank was finally acquired by National Provincial Bank, but continued to operate quite independently with a Manx board of directors. New departments were set up and additional branches opened at Ballasalla, Ronaldsway Airport, Ramsey Mart and Ballaugh. Also in 1961 the banknote licences of all commercial banks on the Island were revoked and Isle of Man Bank was subsequently appointed to manage the note issue of the Isle of Man government. By 1965 Isle of Man Bank had deposits of over £10 million and 143 staff.

In 1968 National Provincial Bank joined with Westminster Bank to form National Westminster Bank. From the late 1960s, the Isle of Man Government used financial incentives to attract business from the UK and the economic importance of the financial services sector in the Isle of Man increased. Isle of Man Bank flourished and by the 1980s began to enter the offshore market, alongside developing its local business and growing its shipping and insurance activities. Following the acquisition of National Westminster Bank by The Royal Bank of Scotland Group in 2000, Isle of Man Bank continues to operate independently as part of The Royal Bank of Scotland Group.

Our archival records of Isle of Man Bank have the reference code IOM.