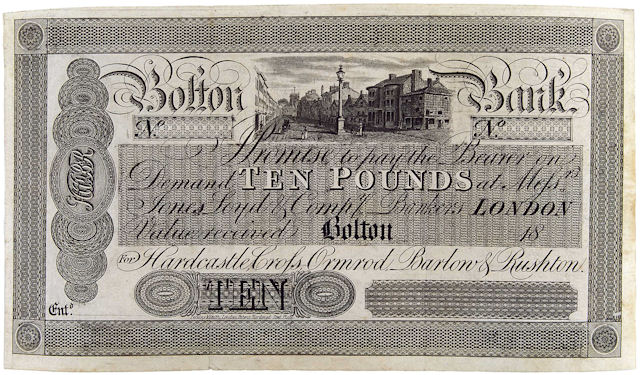 Hardcastle, Cross & Co (1818-78), established in Bolton, was a past constituent of the Royal Bank of Scotland.

This private bank, Bolton's first commercial bank, was established in July 1818 by five Bolton businessmen: Thomas Hardcastle, James Cross, James Ormrod, Robert Barlow and Thomas Rushton. The bank traded as Hardcastle, Cross, Ormrod, Barlow & Rushton, but was also known as Bolton Bank. Initially Barlow ran the business, alongside his insurance agency work, from premises in Water Street. The bank issued its own notes from 1821, but the circulation was never very large as Lancashire merchants and manufacturers favoured the inland bill of exchange. At the end of 1821 the bank had deposits of £44,250 and its London agents were Jones, Loyd & Co. By 1822 the bank was trading from premises in Market Street and the business grew rapidly. In 1824 Barlow's son, Robert Sharpe Barlow, also joined the firm. In 1825 the bank survived the financial crisis, Peter Ormrod succeeded to the partnership upon the death of his father, James, and the bank was restyled Hardcastle, Cross & Co. By 1834 the bank was trading from new premises on Deansgate.

In 1838 Thomas Rushton died and was succeeded as partner by his son, Thomas Lever Rushton. The next year Thomas Hardcastle also died. In 1842 the issue of banknotes was abandoned. Robert Barlow died in 1849, followed by the last of the founding partners, James Cross, in 1850. Barlow was succeeded as managing partner by his son, Robert Sharpe Barlow, in whose hands the business flourished, until he committed suicide in 1858. Barlow's place as managing partner of the bank was taken by Thomas Lever Rushton. In 1864 the bank appointed London & Westminster Bank in place of Jones, Loyd & Co as its London agent. From 1868 temporary premises in Corporation Street were occupied whilst the old Deansgate bank was demolished and replaced by a purpose-built banking house, opened in 1875.

In 1878, with the stability of the business jeopardised by sizeable bad debts on two business accounts, the bank was sold to Manchester & Salford Bank for over £554,000.

Our archival records of Hardcastle, Cross & Co have the reference code HC.