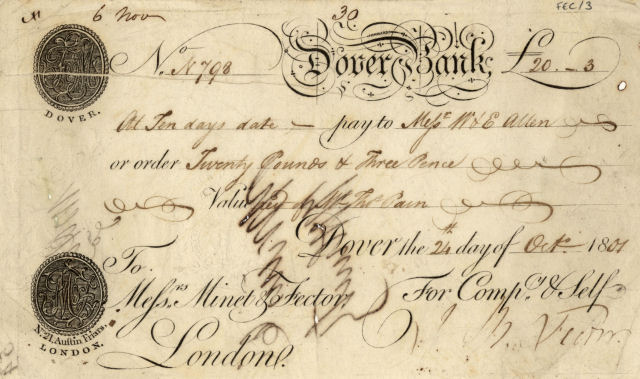 This private bank traces its origins to the merchanting business established in Dover by the French Huguenot refugee Stephen Minet in c.1686 after fleeing Calais. Minet died in 1690 and the business was taken over by his brother, Isaac, who became an important local merchant and shipping agent. From the outset the family also owned a linked commercial firm in London.

In 1814 Peter Fector died and his son and partner, John Minet Fector, assumed control of the Dover business and separated it from the London firm of Minet & Fector that had previously acted as its London agent. Thereafter Smith, Payne & Smiths became the Dover firm’s London agent. John Minet Fector died in 1821 and thereafter the commercial firm was separated from the bank as Fector & Co. The bank traded independently as J Minet Fector & Co, managed from 1821 by George Jarvis and from 1827 by Henry Bruyeres.

In 1833 John Fector, John Minet Fector’s son, came of age and assumed control. The bank was styled Fector & Co by 1841; it was also known as Dover Bank and later as Dover Old Bank. The bank issued its own notes. In 1842 John Fector sold Fector & Co to National Provincial Bank of England.

Our archival records of Fector & Co have the reference code FEC.