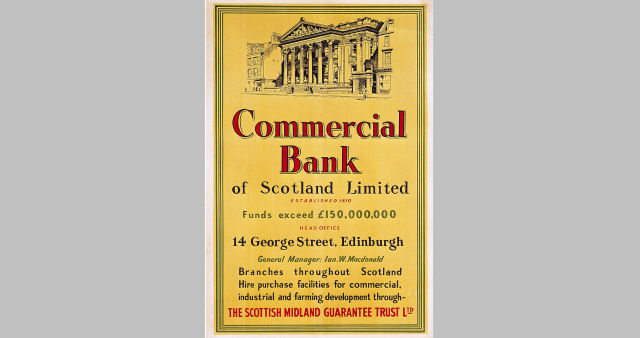 Commercial Banking Co of Scotland was founded in 1810 as a co-partnership to provide banking facilities to commercial, industrial and agricultural businessmen of modest means. It had 16 directors, including Henry Cockburn, Forrest Alexander and James Wyld. As a joint-stock bank with substantial capitalisation (authorised capital £3m, of which £450,000 was initially called up) and large shareholding (673 shareholders by 1815) it presented a considerable challenge to the existing public banks.

From the outset it issued its own banknotes. By the end of its first year of trading it had £262,000 notes in circulation. It also immediately began to establish branches over a wide geographical area, and by 1815 had 14 branches. The bank grew rapidly, acquiring Caithness Banking Co in 1825 and securing a royal charter in 1831. It relied heavily on its London agents, initially Bruce Simson & Co and from 1864 London & Westminster Bank.

By 1840 the bank had 45 branches, and in 1844 it took over Arbroath Banking Co. In 1843 the bank acquired property in George Street, Edinburgh, where it erected a purpose-built head office to designs by architect David Rhind. The new building opened in 1847.

By 1860 the bank had 56 branches; the second largest network of any Scottish bank. In 1882 it adopted limited liability. In 1883, following the example of other Scottish banks, Commercial Bank opened an office in London. The bank continued to thrive during the early 20th century, increasing its number of branches from 138 in 1900 to 240 in 1920.

During the inter-war period it became the second largest bank in Scotland in terms of liabilities, deposits and advances. In 1928 it pioneered a scheme to attract small savers by offering favourable interest rates on tiny deposits.

Despite its success and large number of branches, Commercial Bank's capital resources were modest, and its interests undiversified. Its management was becoming increasingly aware of the acute need to find a suitable trading partner. In 1954 Commercial Bank bought Scottish Midland Guarantee Trust, the hire purchase subsidiary of Scottish Motor Traction, thereby becoming the first British bank to take a direct financial interest in hire purchase.

Branches: In 149 years of operation the bank opened 363 branches and sub-branches throughout Scotland, as well as four in England (in London and Berwick). At the time of the 1959 merger, 292 branches were operating.

Our archival records of Commercial Bank of Scotland Ltd have the reference code CS.