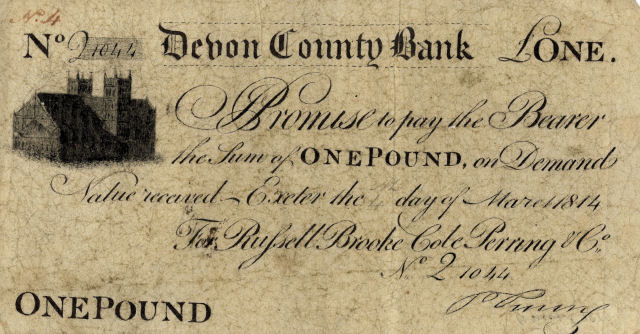 This private bank was established in 1807 as Russell, Brooke, Green, Cole, Perring & Co. Its founding partners were Robert Russell, a local carrier; John Cole, from a local merchant family; and Joseph Green, Philip Perring and Charles Brooke, all of whom lived in London.

By 1817 Russell and Cole were the sole remaining partners, trading under the name of Russell, Cole & Co. In 1822 Russell died and John Cole was joined by his nephew William Cole Dicker. The partnership, known as John Cole, William Cole Dicker & Co, also took the name Devon County Bank.

In 1842 the business was sold to National Provincial Bank of England for £13,000 and amalgamated with the business of that bank's Exeter branch.