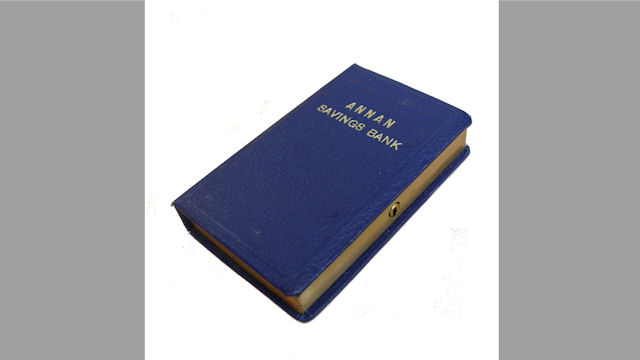 Annan Savings Bank (1835-1985), established in Annan, Scotland, was a past constituent of the Royal Bank of Scotland.

This savings bank was established in 1835 under the provisions of the 1819 ‘Act for the protection of banks for savings in Scotland’. It was open for one hour a week on Thursdays (Fridays from 1871), operating from a room in shop premises in Annan. Its first governor was Provost Senhouse Nelson; its first treasurer, James Saunders; and its first secretary, James Simpson. The funds of the savings bank were controlled by a court of directors, consisting of six trustees and the treasurer. There was also a standing committee (replaced by an audit committee in 1889), which had 23 members including the trustees, treasurer and secretary and which had powers to reverse the decisions of the court of directors. The trustees, treasurer and standing committee were chosen at the annual general meeting of depositors. Customers could deposit sums of between one shilling and £10 each year and by 1836 the savings bank had 80 accounts and deposits of £310.

The Banking Act 1979 prohibited the acceptance of deposits unless exempted by the Act or licensed by the Bank of England. As a temporary measure savings banks operating under the Scottish Savings Bank Act of 1819 (of which there were two - Annan Savings Bank and Airdrie Savings Bank) were exempted, but this was not a long-term solution. By 1984 the savings bank had 5,385 accounts and £3,309,531 of deposits and in late 1984 Annan Savings Bank, judging it unlikely that a licence would be awarded, agreed to a takeover by the Royal Bank of Scotland. The agreement took effect in January 1985.

Our archival records of Annan Savings Bank have the reference code AS.